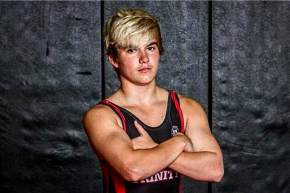 Mack Beggs is a 17-year-old transitioning from female to male and a high school wrestler living in Texas. He’s undefeated, with a current record of 52-0 and is the recent winner of the 110-pound championship in Texas’s Class 6A Region II. Thanks to a backward, transphobic regulation, he is wrestling against girls. That is, when his opponents choose to compete against him at all.

In 2016, the University Interscholastic League, Texas’s administrative and organizing body for all public high school sports, added a provision to its rulebook stating that an athlete’s gender would be determined by his or her birth certificate. As such, Beggs, who began taking a regimen of medically prescribed testosterone in October 2015 as part of his transition, was forced to join the girls’ varsity team.

But on Saturday, two opposing female wrestlers forfeited rather than take the mat against Beggs because they felt it was “unsafe.” The question of safety and Beggs’s transition is at the core of a lawsuit filed 11 days ago calling for Beggs to be suspended from wrestling altogether, though it is unlikely that any action will be taken prior to Texas’s state tournament in Houston on Friday.

Via the Dallas News:

Madeline Rocha’s forfeit came 11 days after a lawsuit was filed against the University Interscholastic League by Coppell attorney and wrestling parent Jim Baudhuin, urging the governing body to suspend Beggs because of the use of the steroid. The suit claims that allowing the wrestler to compete while using testosterone exposes other athletes to “imminent threat of bodily harm.” Baudhuin’s daughter is not in the same weight class as Beggs.

Beggs’s testosterone regimen is permissible, according to the UIL, as long as it is, “dispensed, prescribed, delivered and administered by a medical practitioner for a valid medical purpose.” Beggs’s legal guardian said his medical records have been submitted to the UIL and showed testosterone levels within the acceptable range.

What’s more, the question of any immediate gain in muscle mass and strength is not a given for a trans athlete and any changes tend to stabilize after a year. As Diane Ehrensaft, a clinical and developmental psychologist, told the Dallas News, “Not every kid I’ve seen who has gone on testosterone has added muscle mass.”

Baudhuin claims that the suit was brought not because he or the other plaintiff harbored transphobic beliefs. Still, while speaking to journalists, he has repeatedly misgendered Beggs.

“At least if Mack wants to compete against the boys, she’s doing it knowingly and willingly,” he said. “The other girls in the bracket don’t have that choice. They show up to the girls’ competition, and there is somebody who is not really a girl — not really a boy yet — but who is closer to the boys than the girls.”

And yes, a few far-right blogs have used Beggs’s story to offer up some science-free hatred and keening outrage. If you want to reach down into the online muck and read them, go ahead. But if you’ve read any of the commentary by those in favor the bigoted “bathroom bills” in North Carolina and Texas, you can pretty much guess the basic thrust of the argument: Beggs is somehow less than human, is gaming the system to gain an unfair advantage, and poses a threat to women. All of which is nonsense.

So, transphobic regulations forced a kid, whose guardian has made it clear that he wants to compete against boys, to deal with forfeitures, wrongheaded bigots, and frivolous litigation. And any changes to the UIL’s rules will take at least a year, meaning Beggs will have to go through all if this again during his senior year, as will any other trans kids in Texas who want nothing more than to be able to participate in sports.