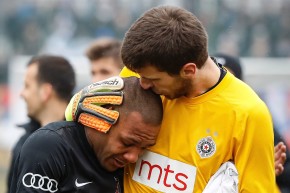 Despite the delusional ramblings of a retired Russian midfielder turned racism inspector and FIFA’s mission “fulfilled” proclamation, racism remains a major problem in international soccer, particularly in Europe, it seems. Just last weekend, a Brazilian-born player for FK Partizan in Serbia, Everton Luiz, received such overwhelming racial abuse by the fans of FK Rad that he literally left the field sobbing.

“The fans were shouting calling me a monkey, imitating the animal the whole time,” Luiz said to the Daily Mail. “When I got close, I could here it more loudly and I became very angry. But even so I had to carry on playing and representing my team.

“The worst thing was the players from the opposing team, who are professionals like me, but who didn’t make any stand at any moment. They didn’t ask their fans to stop and at the end, they even wanted to physically attack me because I reacted to the offenses. This was most difficult.

“I still haven’t managed to forgive them. Maybe later down the line, with more calm, I might be able to. It would be hypocritical for me to say I have forgiven them, when it is not true. Sincerely, I haven’t heard even an apology from anyone.”

Worst of all: Instead of apologizing, a vice president for Rad, Jelena Polic, actually doubled down on the sentiment from her club’s fans, posting on Facebook (and since deleted, though screen-shotted and translated by European media company SBS):

“The whole story about this ‘big’ Everton player and the stuff that happened on the game between Rad and Partizan is biased and sad.

“Apparently we have to respect others more than ourselves, to be proud when in the ‘TITO’ team [Partizan] has 7 foreign players. And then fake tears, fake ‘I love Serbia and I see it as my home’ story.

“Well, why don’t you go back to Brazil and show your dark fingers to them and swear on Brazilians mothers and everything will be ok.

This . . . this is, needless to say, horrendous. Having an executive condone such outrageous behavior and then add her own vile, unadulterated hate is beyond comprehension and demands a swift and harsh rebuke from FIFA and the Serbian league.

It’s particularly galling that she maintained some degree of self-awareness in quoting the tagline from the FIFA anti-racism committee—you know, the one that the soccer body felt had completed its work—and also may well have been taking another completely abominable jab at Luiz, who after the game told reporters, “I want to forget this as soon as possible. I love Serbia and the people here, that is why I cried. But please say no to racism.”

Yes, the soccer community and the world should say no to racism, but the disturbing frequency of such incidents and the continued denial about the work that needs to be done means the revival of FIFA’s subcommittee—and much, much more—should be atop the governing body’s agenda.