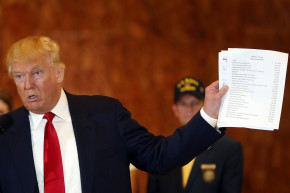 Despite the possible future presence of a Donald Trump-mandated border wall between the U.S. and Mexico—not to mention a possible dissolution of NAFTA—the North American soccer federation, CONCACAF, plans to make a joint bid for the 2026 World Cup with the U.S., Mexico, and Canada sharing hosting duties.

CONCACAF president Victor Montagliani—a Canadian businessman and straight-shooter whom you might be remember from such previous episodes as admitting that FIFA is indeed corrupt—told Reuters that the potential for a giant geopolitical mess created by Trump’s presidency is not a dealbreaker.

“Not withstanding some of the politics that is occurring in this part of the world, Trump has been pretty consistent in his support of global events and sport throughout his career as a businessman. I am not sure I would see that necessarily changing now that he is a president,” Montagliani said.

“It is important, if we are going to do something like this, that we get it right from a football and administration end before we start worrying about anything above that. But I am also confident that a World Cup, the only thing of its kind would, no pun intended, trump politics.”

First of all, he clearly intended that pun and should just own it. And he’s half-right about ignoring the current political climate, because this bid is for a tournament that’ll be held in nine years—outside the bounds of even a possible two-term Trump presidency. But politics and international relations must have some bearing on the decision; if there’s, say, a war or even a full tourist boycott of a country, that could be more than a little problematic. Those are issues that don’t disappear overnight.

So much can change between now and then and, quite frankly, the international body, FIFA, doesn’t have a lot of choices. FIFA is committed to expanding that year’s Cup from 32 teams to 48 in what we charitably labeled a “soulless cash grab” and, with that increased field, come a need for more games (rising from 64 to 80). As Montagliani told the wire service, there may not be a need for that many more stadiums so much as larger demand for hotels and proper practice facilities.

There are now fewer single countries with the logistical resources capable of hosting the tournament. The United States is one of them but is unlikely to be rewarded with an outright hosting gig while in the midst of a possible immigration ban and other xenophobic policies; it’s likely more palatable for the U.S. to be merely one of the sites.

As CONCACAF general secretary Philippe Moggio told ESPN Deportes last month, “There aren’t many countries in the world which can say they will have no problems in hosting this kind of competition. This makes co-hosting bids, such as the one in our region and with three countries involved, more feasible.”

Even more appealing is the idea Montagliani floated of extending the Cup beyond just the three CONCACAF powers and including smaller Central American and Caribbean nations for one-off group stage games. There are logistical issues with the tournament bracket, as host countries customarily are granted automatic bids, and now we’re suddenly talking about four, five, or more of those—but with a 48-team field, such an issue can probably be figured out.

“You have to look at the economics as well, weigh in the cost-benefit,” Montagliani told Reuters, “but I think the possibilities are endless, to be honest with you, when you have that many games.”

A truly continental World Cup has some appeal—aesthetic for fans, economic for FIFA—and it’s about the only silver lining to the expanded field.