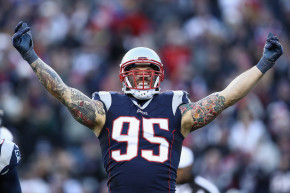 Twitter threads are bad, but this one was pretty good

While Hightower and Branch claimed their decision had nothing to do with politics, the other four have made it clear they don’t want to be used as a cheap prop or in any way be seen as providing a de-facto endorsement of the rock-dumb sociopath inches away from the nuclear football.

Bennett in particular offered a cogent, nuanced explanation, but sometimes it’s more viscerally satisfying to just tell the madding crowd to fuck off, which is more or less why the universe provided us with the Great Electronic Twitter Machine.

Long tweeted that he wouldn’t be attenting on February 9, after a New York Daily News columnist wrote an open letter which implored him to join his fellow Patriots. That didn’t sit too well with Long, and not just because open letters of this sort tend to be little more than sanctimonious grandstanding, but rather to make it clear that he wanted to explain his reasons on his own time and didn’t need anyone else to explain his thinking and political stance to him.

In the days that followed, Long has been beseiged by all manner of trolls and Mad Online dudes, which finally drove him to unload.

“Heard it all this week…if you don’t want to hear about some of the dumb shit I’ve heard…mute away, but it’s good. Rapid fire time, yeah?” was Long’s opening salvo on Thursday night. He then proceeded to categorize all the types of idiotic replies he’d received along with his rebuttals of their non-arguments.

To all those who unconditionally kowtow to authority:

To the omnipresent (and silly) Stick to Sports crowd:

"Stick to football" you don't look like a state senator yourself there bud.

To those who tried sticking to sports, but aren’t very good at it:

To the always-fun doofs who can’t recognize when they’re owning themselves:

To all the good, old memes:

"You just wanna be a cool lib" Actually I'm well aware the minute I believe something they don't, libs will hit me w this GIF pic.twitter.com/yvc9iBskvm

To all the libs, who, yeah, probably should shut the hell up:

"You just wanna be a cool lib"
As a football player, liberals thought I was a living, breathing piece of steak before I agreed with them.

To those that conflate civilian government with the armed forces:

"You hate the troops" The secondary focus of my foundation (out of two causes) is veteran support. Do your research. Also, not relatable.

To the Race Realists:

"You hate white people" You realize all humans that live in America should be concerned? Also that assumption says something about you.

"You hate white people" Oh yeah, for sure. I despise them but I named my son (who is white) after an outlaw country singer.

To our polarized media landscape:

To those that seem to think Trump will be asking the Patriots their opinions on various pressing policy issues. (Actually, Trump might do that):

"You should go talk to trump if you want change" I'm skipping a photo op, not a congressional hearing.

Threads are usually annoying as hell and/or devolve into self-flattering nonsense, but in Long’s case, we’ll make an exception.

So I've listened to it all week. And it's sparse really. Most people aren't ridiculous. Thought y'all may enjoy that thread.

I think that's it but check this gem out. Bye for now! pic.twitter.com/4kyxRgG4bV