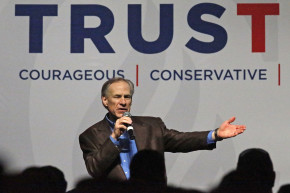 Apparently, all the NFL needs to take a semi-ethical stance is bigoted legislation

Like their fellow revanchist bigots in North Carolina, Texas has rolled out its very own “bathroom bill,” Senate Bill 6, which would force transgender people to use bathrooms that conform to their “biological sex” and wipe away local non-discrimination laws.

Local business leaders have already commissioned studies showing the legislation would lead to serious financial losses, but Friday, NFL spokesman Brian McCarthy was asked whether this legislation might cause the normally politics-averse NFL to reconsider Texas’s future status as host city for the Super Bowl.

McCarthy highlighted the league’s commitment to “inclusiveness” and pointed to its on-the-books anti-discrimination policies, before getting to the question at hand.

“If a proposal that is discriminatory or inconsistent with our values were to become law there, that would certainly be a factor considered when thinking about awarding future events,” he wrote via email

That “if” gives the NFL plenty of room to pivot one way or another, but it’s worth noting that McCarthy issued a near-identical statement in 2015 when asked if Georgia’s proposed “religious liberty” bill might cost Atlanta the Super Bowl. Shortly after the NFL weighed in, Governor Deal vetoed the bill, and Atlanta will be hosting the big game in 2018.

Texas Governor Greg Abbott, however, is digging in his heels. Though he’d previously let Lieutenant Dan Patrick serve as his attack dog while he kept to the background, the NFL’s statement prompted him to fire off a weird tweet equating the New England Patriots Super Bowl win with his political battle.

Then on Tuesday he went on Glenn Beck’s Old Timey Conspiracy Theory And Far Right Panic Radio Hour to tell the NFL to Stick To Sports. “The NFL is walking on thin ice right here,” he said. “The NFL needs to concentrate on playing football and get the heck out of politics.”

He kept going. Transcript via valleycentral.com:

“For some low-level NFL adviser to come out and say that they are going to micromanage and try to dictate to the state of Texas what types of policies we’re going to pass in our state, that’s unacceptable,” Abbott told Beck. “We don’t care what the NFL thinks and certainly what their political policies are because they are not a political arm of the state of Texas or the United States of America. They need to learn their place in the United States, which is to govern football, not politics.”

Abbott, who is not mad online and thinks its funny, really, is of the firm belief that allowing Colin Kaepernick to kneel during the national anthem forced Texans to abandon the NFL in droves because some unnamed constituents told him so. He also called Kaepernick and anyone else protesting “snowflake little politicians” who are definitely “not oppressed.” If only Abbott had said they were the Real Racists™, he’d have fully transformed into a Breitbart commenter.

But giving tacit approval to this legislation would be a political act on the NFL’s part, whether Abbott likes it or not, even if it’s only motivated by concern for its bottom line. Speaking of which, the Texas Business Association opposes this legislation for for the same reason, though they don’t really care if host cities end up on the losing end of the financial ledger when all is said and done. Further, the NFL tends to give the Super Bowl to cities that have recently suckered the locals into helping pay for a shiny a new stadium. That’s poltitics right there, Governor.

And no, just because SB 6, unlike HB 2, carves out an exception for private venues like NRG Stadium or Jerry Jones’ mega-complex in Arlington, it won’t change the NFL’s political and economic calculus, not that there’s any light between the two.

Instead, perhaps Governor Abbott should stick to politics and take a gander at the ultimate fate of former North Carolina Governor Pat McCrory. He went to war against the NCAA, NBA, and a slew of other corporate giants over HB 2 and has been reduced to lobbing mealy-mouthed complaints on various Sunday morning news panels.