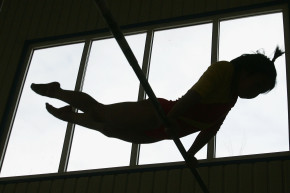 MSU gymnastics coach retired a day after suspension and hours after another allegation emerged in court filing. https://t.co/fa328NBkCx pic.twitter.com/rk14q3rWvI

The university initially suspended Klages on Monday, but she retired on Tuesday, hours after the second allegation surfaced. Klages has denied the allegations.

Part of the statement from Klages' attorney. Said Klages "would never do anything to put" athletes in harm's way and that she trusted Nassar pic.twitter.com/YTVGFsXsN9

The Indianapolis Star has reported extensively on the lawsuits, first with claims that USA Gymnastics failed to report allegations of sexual abuse to authorities, then with details in the lawsuits filed against Nassar specifically, and finally with a full accounting of some 115 adults who stood accused of abusing at least 368 gymnasts in the past two decades.

The most damning allegations are against Nassar, who is said to have abused athletes under the guise of medical treatment. He has been indicted on child pornography charges and stands accused of criminal sexual abuse, with the FBI saying that he filmed some of the alleged molestations on a Go Pro camera; he has pleaded not guilty to all wrongdoing. USA Gymnastics dismissed him in summer 2015 after there were “athlete concerns” that prompted the governing body to report him to the FBI, but Michigan State, which did not terminate his employment until last September, contends that it was not notified.

The logical fear of such widespread and long-lasting abuse is that there had to be some degree of cover-up or other enablement. The allegations against Klages are distressing, especially given how long ago some of the early concerns were said to have been brought to her attention.

“Had a proper investigation been done in the 1990s after both of these athletes told [Klages], all of this could have been prevented. All the other victims might not have been assaulted by Dr. Nassar,” attorney Mick S. Grewal, who is representing 10 plaintiffs, told the Detroit News. “She failed to protect these young women. She should be investigated for her conduct for failing to protect these girls.”

Klages is alleged to have discouraged athletes from sharing concerns about Nassar as recently as last September. The Lansing State Journal shared a letter that MSU athletic director Mark Hollis sent to Klages in which she was accused of discouraging her athletes from coming forward.

“Those interviews also confirm that at the conclusion of the meeting you shared with the team your highly emotional sense of shock regarding the allegations against Dr. Nassar,” Hollis wrote. “That resulted in several student-athletes leaving the meeting feeling that they had received mixed messages. Others felt confused about who they could or should speak with about the situation. While I acknowledge you provided student-athletes with information about reporting to the Office of Institutional Equity, your passionate defense of Dr. Nassar created an emotionally charged environment for the team.”