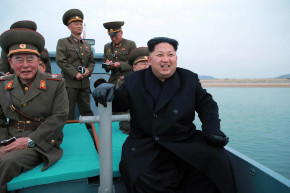 As part of the economic sanctions the United Nations Security Council has imposed on North Korea for its continued testing of nuclear and ballistic weapons—again tested this past weekend—the export of luxury goods including aquatic recreational vehicles (such as personal watercraft), snowmobiles (valued greater than $2,000), and recreational sports equipment were explicitly prohibited.

With one year remaining before the 2018 Winter Olympics—which, incidentally, is being held in South Korea—the deputy secretary-general of North Korea’s National Olympic Committee, Kang Ryong Gil, blasted the sanctions as part of a conspiracy to hinder his country’s ability to compete in global sport, saying in a statement:

Here lies the vicious ulterior political scheme to prevent exchange of sports between the DPRK and other countries, gradually limit its participation in international competitions including the Olympics, push it aside out of the modern civilized world and further seek a regime change.

It is the policy of the government of DPRK and the aspiration of our people to build a sports power and a civilized power by improving physical fitness of the people and developing sports of the country.

However, to our regret, hostile acts are being conducted blatantly on global scale to put the brake on the policy of the DPRK government and hinder the aspiration of the people to develop its sports.

The United States and hostile forces have fabricated six illegal “sanctions resolutions” against the DPRK at the UN Security Council since 2006 with the aim to isolate and stifle the DPRK over nuclear issue and they railroaded the “Resolution” 2270 even including the recreational sports equipment in the sanctions items while adding the luxury goods in March 2016.

As the Associated Press noted, North Korea rarely acknowledges the impact of the sanctions levied against them, refuting the notion that they are any detriment at all, and the ski resort at Masik Pass—built on Kim’s orders a few years ago—remains properly supplied even after some of the economic sanctions targeted equipment necessary for its upkeep. China is suspected of being the conduit for the passage of these goods.

It’s unclear whether North Korea will even participate in next year’s Olympics. The country boycotted the 1988 Games in Seoul and don’t have any obvious candidates who might even qualify. Still, South Korea’s Olympic organizing boss recently invited their feuding neighbor to participate, neatly suggesting they have an obligation to do so.

“We will let any country or athletes participate as long as they promote peace,” Pyeongchang 2018 President Lee Hee-beom said, according to InsideTheGames. “North Korea are not an exception to this. I don’t believe the tension is becoming more serious. The Games will be focused on peace. I believe North Korea have the responsibility to take part if they want peace. And they have a right to compete too.”

The need for world peace obviously outweighs—by far—any duty to provide a foreign country’s citizens access to proper sports equipment, even if the UN tried crafting a sanctions resolution that “were not intended to have adverse humanitarian consequences for the country’s civilian population.” The Olympics are often held up a bastion of peace and international goodwill, but whatever impact that really has is mitigated by the very real and serious threat of increased nuclear capability. Besides, in a country with so little wealth, would expensive recreational sports really have a role?

“Sanctions don’t have much impact on an economy that has been essentially bankrupt for a generation and which long ago lost its most important benefactors,” William Brown, an adjunct professor at Georgetown who has researched North Korea’s economy, told ForeignPolicy.com.

Still, North Korea’s Olympic chief is not mincing words on the purported injustice these sporting goods restrictions are having.

Kang said, “The world, through the abnormal situation taking place before our eyes, should squarely see that sanctions are nothing but a cruel and uncivilized act against humanity and civilization and an act of destroying the modern civilization as well as making the whole world turn back to the medieval dark land.”