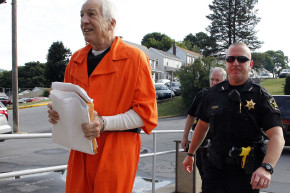 According to multiple reports, Jeffrey Sandusky, the 41-year-old adopted son of Jerry Sandusky (yes, that Jerry Sandusky) has been arrested and charged with 14 counts of sexual assault, solicitation, and facilitation, all of which involve a minor.

Via the Centre Daily Times:

Law enforcement officials told WTAJ that Sandusky had been involved in a romantic relationship with the alleged victim’s mother. He and the woman in question had been living together for five years, but at some point, he asked her child for nude photos in addition to sending a series of explicit text messages which were then passed on to the child’s father. The police were contacted and Sandusky was then requested to vacate the premises. The criminal complaint also alleges that an additional child was abused by Sandusky starting in 2013.

Jeffrey’s father, Jerry Sandusky, is currently serving a 30 to 60-year sentence in a super max prison following his 2012 conviction, when a jury found him guilty of sexually assaulting 10 boys.

Jeffrey Sandusky’s bail has been at $200,000 and he is prohibited from coming into contact with any minors, though to date, he has not been able to raise the funds to pay his bail.

UPDATE: The Centre Daily Times is now reporting that Sandusky tried to convince the minor to keep the text messages in question a secret.

Jeffrey Sandusky’s text request to the minor was redacted in the complaint, however he said that “it’s not weird because he studied medicine.” He then allegedly advised the minor not to show the texts to anyone.

Jeffrey Sandusky allegedly asked the minor to erase all the texts the next morning, police said, and to make sure none of it got mentioned to or seen by anyone. He then told her that he and the minor need to talk to “get things straightened out.”

“No, we don’t need to talk and we aren’t going to,” the minor reportedly replied. “You did what you did and I’m not going to give you a chance to try and justify it.”

They were were allegedly sent on March 1 and March 2, 2016, but were not reported to the police until November. When the child’s mother was interviewed by law enforcement officials in December and shown the messages, she grew visibly upset.

According to the mother, Sandusky told her he requested the images because he knew someone who could get objectionable material scrubbed from the internet. (There is no evidence that the minor had posted anything online that needed removing.) She also added that Sandusky later apologized, saying he “knows it was wrong and inappropriate.”