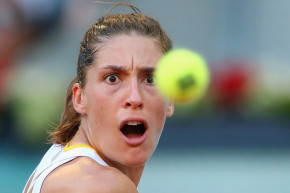 During the 1936 Summer Olympics in Berlin, the German national anthem was played some 400 times, with the Nazi party using the first verse “Deutschland, Deutschland uber alles, uber alles in der Welt” (“Germany, Germany, above all, above all in the world”) as overt propaganda. That verse, for good reason, was retired after World War II, and only the third verse of the German national anthem—“Einigkeit und Recht und Freiheit” (“Unity and justice and freedom”)—is sung in representation and celebration of the country.

This weekend, however, the Nazi verse made an unfortunate return to the sporting realm when Will Kimball, a former professional opera singer, mistakenly sang the verse in lieu of the modern, accepted anthem before a Fed Cup match held in Maui.

The Fed Cup, for the uninitiated, is a major international tournament—the women’s tennis version of the men’s Davis Cup or golf’s Ryder Cup. The German team and their roughly two-dozen fans in attendance sang the correct lines but of course could not compete with the microphone-amplified baritone of the opera singer.

Needless to say, the German contingent was outraged.

“I thought it was the epitome of ignorance, and I’ve never felt more disrespected in my whole life, let alone in Fed Cup,” Germany’s Andrea Petkovic said, before losing her match.

German team coach Barbara Ritter said, “This is an absolute scandal, a disrespectful incident and inexcusable. I could have sobbed. Hearing the national anthem at the Fed cup is a holy moment.”

The U.S. Tennis Association has offered its “sincerest apologies” in a statement, adding, “In no way did we mean any disrespect. This mistake will not occur again, and the correct anthem will be performed for the remainder of this first-round tie.” The German Tennis Federation, however, wasn’t feeling terribly forgiving.

@usta we hope so…

“Our American hosts at the Fed Cup opening in Hawaii made a mistake that should not happen,” German Tennis Federation chief Ulrich Klaus said in a statement. “The fact that in the year 2017 a wrong anthem can be played that is associated with the horror of the past was for players and staff and the officials present both shocking and disturbing. The USTA through its president Katrina Adams has apologized officially in writing and in person and deeply regrets the blunder.”

And so, once again in 2017, the United States has offended a close ally, only this time President Donald Trump was not involved.