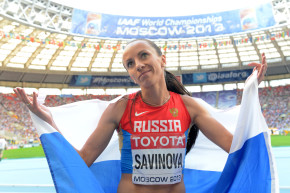 Russian medal-winning runner Mariya Savinova, who helped incite two global sports firestorms, will lose her Olympic gold after the Court for Arbitration for Sport determined there was “clear evidence” that she doped during the 2012 Games in London.

CAS specifically cited her biological passport in making the ruling, which determined that she was cheating from July 2010 through August 2013, resulting in a four-year ban backdated to August 24, 2015. Savinova has not run in international competition since 2013.

Savinova was essentially Patient Zero in the drug crisis—the New York Times dubbed her “The face of Russia’s doping scandal”—which the World Anti-Doping Agency’s reports have since deemed a full state-sponsored institutional conspiracy. Triggering those investigations was a German documentary that aired on ARD in which Savinova acknowledged to Russian doping whistleblower Yulia Stepanova on a secret recording that she took the steroid oxandrolone.

“That is our system and in Russia that only works with pharma [doping],” she said on the recording. “Oxandrolone is very quickly out of my body again. It takes less than 20 days.”

One Russian coach even said in a different recording “they poured so much [drugs] into her [Savinova].”

That film ignited interest in further investigating Russian doping practices. In late 2015, a report by former WADA president Dick Pound revealed enough problems that the entire Russian track and field team was banned, a suspension that remains in place. Richard McLaren, a Canadian lawyer and longtime sports arbiter, followed up with two damning reports about the country’s entire sports program.

As if it were not fitting enough that Savinova would eventually be caught, there’s justice for the recipient of her now-forfeited gold medal: South African runner Caster Semenya. An unsanctioned leak of Semenya’s physiology suggested that she has elevated testosterone levels associated with hyperandrogenism.

When an 18-year-old Semenya won gold in the 800 meters at the 2009 world championships, Savinova’s biting quip after finishing fifth was, “Just look at her.” The ensuing uproar—initiated by Savinova and others—led to new rules that mandated testosterone suppression therapy for Semenya in order to continue competing in the women’s division. That lasted from 2010 until 2015, when CAS overturned that ruling. Semenya won gold in the event at the 2016 Games in Rio and will now receive Savinova’s, making her the first women to win the 800 in two different Olympiads.

Unfortunately, this retroactive medal won’t replace the lost opportunity of an in-real-time victory. As Semenya told reporters in 2015: “There was someone that finished first in the Olympics, whether she doped or not, I came second and that will never change. I ran the Olympics and I won the silver medal, so I can’t celebrate anything other than my silver. Even if they crown me Olympic champion, it is just an award from them I never celebrated. It wouldn’t mean anything for me, it would be great for my country but for me as an athlete I cannot entertain the thought.”

And though Savinova’s doping penalty provides some justice, it can never be enough.