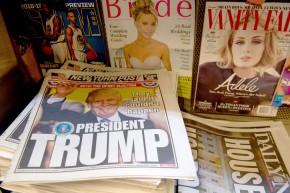 A prominent legal expert doesn't think the writer, Bart Hubbuch, has much of a case

On January 30, Bart Hubbuch, the long-time New York Post sports writer, announced that he had been fired over a tweet sent on Inauguration Day in which he listed the dates “12/7/41. 9/11/01. 1/20/17.” It was a clear attempt to equate the presidency of Donald Trump with two of the worst tragedies in American history. In response, Hubbuch was met with a barrage of criticism and quickly apologized. The tweets in question have been deleted, but his act of contrition wasn’t enough for the Post.

Now, Hubbuch is suing the Post, seeking compensatory damages—including lost wages and reinstatement—based on an alleged violation of New York State Labor Law § 201-d. Specifically, the law states that an employee cannot be terminated for “an individual’s political activities outside of working hours, off of the employer’s premises and without use of the employer’s equipment or other property.”

According to a copy of the lawsuit obtained by Vocativ, Hubbuch says that he sent the tweet during non-working hours from his personal device, adding that he repeatedly asked Chris Shaw, the executive sports editor of the Post, whether or not any official policy regarding social media conduct existed to which he received no reply.

After the tweet in question had been deleted, Hubbuch was reprimanded by Shaw, who allegedly said in a phone call, “What are you doing? You live in New York City. There are people even in here that want me to fire you. You’re going to take that down right now and apologize or I will fire you.”

Hubbuch assumed that the matter was then closed, but one week later, he was called in to meet with both Shaw and the Post’s senior director of human resources. He was then fired for both his Inauguration Day tweet and other inappropriate tweets he’d made in the past.

The lawsuit argues that Hubbuch’s political tweet scans as tame compared to the tone and content that appears as a matter of editorial policy in the Post. It describes the tabloid as “not known for its sensitivity” and says it “regularly exploits tragedy, violence and death to sell news. It also pushes the bounds of what is considered appropriate news coverage.” Examples cited include front page photos in which President Obama was depicted wearing garb similar to Fidel Castro and Mayor Bill de Blasio as Mao Zedong.

The Post has also run editorials that have been highly critical of institutions that cracked down on the free expression of political beliefs, which would seem to contradict their decision to fire Hubbuch. In a recent article, the Post provided favorable coverage of a New York University professor who created an anonymous twitter account to rail against the “PC Gestapo.” The professor was put on paid leave after his identity was made public. The suit also brings up the Post’s coverage of far-right meme-hawker and retired baseball All-Star Curt Schilling.

Likewise, when ESPN fired baseball legend Curt Schilling and apparently removed him from a documentary for sending controversial tweets, the Post’s Editorial Board wrote that it was “petty and childish” for ESPN to fire him, and that removing him from the documentary was “full[y] Stalinist,” thus likening ESPN’s conduct to that of history’s second worst mass murderer

And then there’s this bit of trolling.

Post readers don’t need, demand, or expect “safe spaces,” or to be sheltered from controversial views.

The lawsuit further alleges that by firing Hubbuch, Rupert Murdoch is attempting to curry favor with President Trump, who reportedly reads the Post every morning and has shown that he will lash out at both journalists and outlets that offer any criticism.

The decision to fire Plaintiff for his anti-Trump tweet can only rationally be explained as having been influenced by Murdoch’s interest in pleasing Trump and not upsetting him, now that Trump has the power to either directly benefit or harm Murdoch and 21st Century Fox.

Hubbuch is also of the belief that his tweets have helped him make social connections that would otherwise be unavailable and have provided a necessary outlet during trying times.

Plaintiff’s “tweeting” hobby helped relieve the stress of working for a newspaper with many views Plaintiff strongly disagrees with.

“We expect our reporters to interact with the public, including on social media, in a professional manner. Unfortunately, Mr. Hubbuch has engaged in a pattern of unprofessional conduct and exhibited serious lack of judgment, including most recently showing disrespect for the victims of Pearl Harbor and ‪9/11.”

Reached by phone, Hubbuch’s attorney, Scott Lucas, declined to comment on the relative strength of their case, saying, “We think the most prudent course of action at this time would be to refrain from public comment and allow the matter to be determined in a court of law.”

Will he prevail? Vocativ contacted Alan Milstein, a prominent litigator and legal expert. He said that while he agrees with Hubbuch’s opinion of the President and finds the Post’s stance here “incredibly hypocritical,” he doesn’t think Hubbuch has much of a case.

“I do not believe the lawsuit has merit,” Milstein writes via email. “The argument that this was a ‘private’ Twitter feed makes no sense. Whether one is a journalist, athlete,  politician, or any public figure, your Twitter account is part of your public persona. No one follows Mr. Hubbuch because of his private life; they follow him because he is a Post writer.”

Milstein added that even if the Post lacked a stated social media policy, Hubbuch still should not have assumed that there would be no repercussions for his political speech, nor does the law protect him.

“The Post can fire an at will employee for any reason, even the wrong reason, as long as it does not violate some law like the cited NY Labor Law or the Civil Rights Act,” Milstein writes. “I just don’t think a Twitter feed is recreational under the Labor Law.

“And it is ludicrous to argue it was typed on his personal computer at home. Journalists today write their stories occasionally on their personal computers or iPads or iPhones. The question is whether the readers of his Tweets associate him as a Post writer and if you look at his Twitter account, the first thing it says is ‘Veteran sportswriter.’”