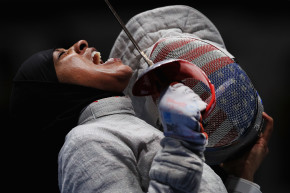 Ibtihaj Muhammad, a Muslim-American fencer, revealed that she was held for two hours

Okay, here’s the thing, Ibtihaj Muhammad is way more successful than you. She graduated from Duke; is a medal-winning Olympian fencer who ranks top-10 in the world; was runner-up to Michael Phelps in a vote to carry the American flag at the Opening Ceremonies in Rio; sits on the President’s Council on Fitness, Sports, and Nutrition; works for the U.S. State Department’s Empowering Women and Girls Through Sport Initiative; started her own clothing line; and was named one of TIME magazine’s Top 100 Most Influential People.

However, her life is much more difficult than her bio would suggest. Muhammad is both the first Muslim-American woman to medal for the U.S. and the first American Olympian to compete wearing a hijab. In other words, she perfectly matches the profile of someone who stands to have their life sideswiped by Donald Trump’s xenophobic policies.

While Trump’s executive order targeting Muslims entering the country isn’t supposed to affect U.S. citizens like Muhammad, in an interview with PopSugar this week she revealed that she was detained at U.S. Customs.

POPSUGAR: Do you know anyone who was directly impacted by Trump’s travel ban?

Ibtihaj Muhammad: “Well, I personally was held at Customs for two hours just a few weeks ago. I don’t know why. I can’t tell you why it happened to me, but I know that I’m Muslim. I have an Arabic name. And even though I represent Team USA and I have that Olympic hardware, it doesn’t change how you look and how people perceive you. Unfortunately, I know that people talk about this having a lot to do with these seven countries in particular, but I think the net is cast a little bit wider than we know. And I’m included in that as a Muslim woman who wears a hijab.”

This bears repeating: this woman has a bronze medal while competing for the U.S. in the Olympics, serves in multiple high-level government programs, and was born in suburban New Jersey.

So while much of the attention in the sports world on Donald Trump’s executive order—currently suspended while being fought in the judicial system—was filled with general condemnations from athletes or concerns about international athletes being able to compete in the U.S., Muhammad’s example reminds us that not even Americans are immune from this administration’s prejudice and suspicion. It illustrates why the order is not just an immigration ban but a Muslim ban, as it extends beyond residents of the seven named countries.

Just last week at the ESPN Super Bowl party, Muhammad said, “I think that we are moving in the wrong direction as a nation, and I hope that we work toward a more inclusive space very soon.” Even last summer, she told the Daily Beast that she felt unsafe “all the time” in the U.S. When asked about Trump at the time, she laughed and pretended not to know who he is, but such playful ignorance evaporated quickly when he was elected and began implementing policies directly affecting thousands of people, including Muhammad.

Thankfully, the U.S. is represented not only by the bigots who want to keep out Muslims, but also by people like Muhammad who call for action to fight prejudice.

“I think that when we stand in solidarity, we’ll be stronger,” she said, in that PopSugar interview. “For those people who fail to see the injustices that are occurring, in particular with the Muslim community, I think it’s because you’ve sat in a seat of privilege for a long time, and you kind of choose to be myopic and not think of those people around you.

“This is a moment where we choose the moral high ground and we think of each other as brothers and sisters and speak up for those who may not be able to.”

Recognizing how outrageous it is that a U.S. native and Olympian can’t even pass through customs without senseless hassle is a start.