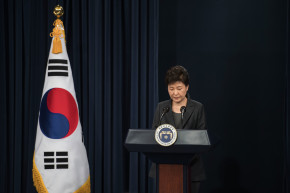 The usual seven years’ or so worth of lag time between a country’s bid for the Olympics and actual hosting thereof makes predicting the political and economic climate once the Games kick off dicey at best. Brazil, for instance, was booming when it bid in 2007 and now can’t pay its Olympic bills.

Now, enter South Korea, whose northern ski resort city, Pyeongchang, was granted the 2018 Winter Games back in 2011, when optimism reigned supreme. This contemporaneous Wall Street Journal account noted that the International Olympic Committee deemed tensions between North and South Korea to be low-risk; an Associated Press report relayed that the Games were expected to “encourage a mood of peace and even prod North Korea into reaching out to the world.” A shopkeeper in Pyeongchang told the New York Times then, “I hope that we can cede some of the games to North Korea across the border, and make this an Olympics for Korean unification.”

Instead? North Korea conducted a pair of nuclear tests just last year and three in total since 2013.

And, as the AP reported this week, that worsening diplomatic situation is only one of their major concerns. Korea’s president, Park Geun-hye, has had her authority suspended while facing impeachment proceedings after she was accused of accepting tens of millions in bribes along with her associate Choi Soon-sil. (Both women maintain their innocence.) The country’s culture minister, Cho Yoon-sun, was recently arrested for ancillary support of the graft scandal enveloping the president. A recent vice sports minister, Kim Chong, was also arrested on charges of abuse of authority and leaking official secrets, with prosecutors alleging that he pressured Samsung to give more than $1 million to the Korea Winter Sports Elite Center run by Choi’s niece.

The Pyeongchang organizing committee chief, Lee Hee-beom, maintains that none of the Olympic contracts have been “contaminated” and told reporters, “I admit that the Winter Games have been the target for such corruption but I can clearly say that no such attempts actually materialized.” Still, a specter of scandal hangs over the entire country, as it involves not only the president but also Samsung, Korea’s most high-profile corporation.

So, for a change, even though a brewing scandal may not be directly related to the Olympics, the two always seem to find each other, inextricably intertwined to the end.