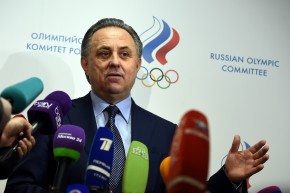 When track and field’s international governing body, the IAAF, indicated that it would extend Russia’s blanket ban through this summer’s world championships, the country’s deputy prime minister and former national sports boss, Vitaly Mutko, made a candid admission to a state news agency.

“There were many abuses and breaches,” Mutko told R-Sport, as translated by the Associated Press. “Athletes broke the rules and many coaches don’t understand how to work without doping and it’s high time for them to retire. But over the last year, colossal work has been done.”

One would presume that simply not doping should be a clear and obvious alternative, but maybe not.

Though Mutko was willing to blame athletes and coaches, he has been in steadfast denial about culpability among the higher ranks. A few weeks ago—which was just one month after the second damning McLaren Report on Russian doping—Mutko dared proclaim that “Russian sports are among the cleanest in the world” and that anything said to the contrary was “absolutely political,” a “deliberate attack on Russian sport aimed at its defamation,” and with “not a single fact” of support.

It’s no wonder that, on the same day, IAAF taskforce leader Rune Andersen blasted Mutko for his “negative and unhelpful” comments about the crisis.

The Olympic news site InsideTheGames reported that Mutko has acknowledged privately that Russia is still contending with issues bequeathed to them by the Soviet Union, but he has yet to hint that publicly.

It’s no wonder Andersen made this plea: “In general, I wouldn’t pinpoint any specific person that needs to say apologies,” he said, per the New York Times. “But we expect that the Russian community is acknowledging that they have a problem, because only when you acknowledge you have a problem can you do something about it.”

Russia continues to oscillate between denial and acceptance. Anna Antseliovich, the acting director general of Russia’s national antidoping agency, told the Times in December, “Of course it was an institutional conspiracy, but not state-sponsored.” Mutko denies that notion, as did Russian track federation vice president Andrei Silnov on Monday, who reportedly said, “They say we have a culture of doping. What culture of doping?” A Russian Olympian-turned-Senator named Tatyana Lebedeva, who was recently stripped of two medals, blamed the crisis on the “Anglo-Saxon lobby.”

One would think there’d be a more cogent consensus from Russian officials, so long after the multiple World Anti-Doping Agency reports and the government’s reported retainer of global PR firm Burson-Marsteller, whose past clients include Philip Morris tobacco, Saudi Arabia after 9/11, the generals of Argentina’s military junta in 1976, and genocidal governments like Nigeria and Indonesia.

As it stands, the IAAF won’t allow a Russian contingent at worlds, but the group will entertain 35 applications from Russians who may be able to compete as “neutral” athletes, a right already granted to doping whistleblower Yulia Stepanova and U.S.-based long jumper Daria Klishina.

If, in this stage of heightened scrutiny, individual Russian athletes can prove they are training and competing clean, they should be afforded the opportunity to compete on their own, but it’s hard to grant full admission back to the country’s contingent when some athletes, per the AP, have avoided doping agents by pulling out of races, giving fake urine, and literally running away.