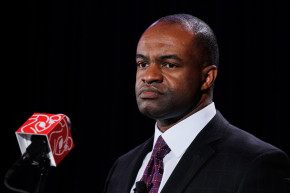 NFL Union Goes After Chicago And The Bears
By Robert Silverman

NFL Union Goes After Chicago And The Bears

A bill currently being considered by the Illinois State Senate would dramatically shorten the number of years a professional athlete could receive worker’s compensation benefits. Under the current law, any athlete who’d suffered a serious enough injury on the job and had spent his or her career in Illinois could apply for up to $1,075 a week or $55,900 a year until age 67.

If Senate Bill 12 passes, however, benefits for pro athletes would be cut off at 35, a measure that has the “full and complete support” of  Chicago’s five major sports teams. On Friday, DeMaurice Smith, the executive director of the National Football League Players Association—the often feckless, politically compromised union—pushed back, going on Chicago radio to call the proposed legislation “cheap” and saying “Its only effect is to hurt people who get hurt for a living.” What’s more, he’d do everything in his power to steer free agents away from signing with the Chicago Bears.

“I will tell you from the bottom of my heart that this union will tell every potential free-agent player, if this bill passes, to not come to the Bears,” Smith said. “Because, think about it, if you’re a free-agent player and you have an opportunity to go play somewhere else where you can get lifetime medical for the injury you’re going to have, isn’t a smarter financial decision to go to a team where a bill like this hasn’t passed?”

Smith also claimed that the McCaskey family, the owners of the Chicago Bears, have been quietly working behind the scenes to see if the legislative scales can be tipped.

“The Bears’ owners are behind it as well. To be blunt, it’s just another way to bankroll the coffers of the rich owners who own these teams at the expense of the players who actually do all the work … They’re pushing the bill. Our understanding is they are the people who have lined up a lobbyist to promote the bill.”

The bill’s proponents point to the fact that the average pro career usually lasts between three and five years, and as such, Illinois shouldn’t be on the hook. James McAndrews, the Bears’ long-time attorney, told the Chicago Sun-Times that SB 12 is merely a “market correction” that “seeks to provide some conformity with reality.”  But as Richard R. Gordon, a lawyer and NFLPA lobbyist who testified against the bill on January 27, told the Chicago Daily Law Bulletin, there are professional athletes working in Illinois who aren’t earning multi-million-dollar salaries in Illinois, which is home to a slew of minor league baseball and hockey teams, as well as the WNBA’s Chicago Sky, all of whom pay relatively meager salaries. “That’s who this law would hurt,” he said.

What’s more, selecting one class of workers as somehow undeserving of the full protections of Illinois’ safety net could prove a dangerous precedent. “How long until the business community comes back again and says we should carve out another group? And where do you draw the line? It’s a very slippery slope.”

The McCaskey family has yet to publicly comment, but the Bears issued a statement reaffirming their support whilesomehow framing any tinkering with the Worker’s Compensation Act as good for professional athletes.

“We join the four other major professional Chicago teams in monitoring and supporting changes to the system that protect athletes’ rights under the workers’ compensation system while acknowledging athletes are not competing professionally until age 67. Nothing in the wage differential language under consideration impacts the right for any athlete to receive just compensation for partial or permanent injury, medical benefits or to file a claim itself,” the statement said.

Funny thing, said statement didn’t address Smith’s claim that he’d warn away potential free agent signees, nor did they confirm or deny that the Bears’ “support” meant whispering sweet nothings in the ears of an unknown number of Illinois politicians. Funny that.