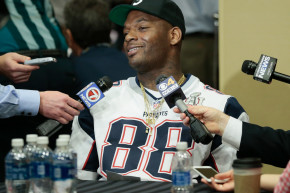 Martellus Bennett, the New England Patriots’ amiable and outspoken tight end, drew the penalty to set up the team’s game-winning touchdown in overtime, but he quickly followed that bit of history up by making official what he had hinted at in advance of the Super Bowl: he will not join the Patriots in their traditional White House visit in protest of President Donald Trump.

Bennett is hardly the first athlete to skip a trip to 1600 Pennsylvania Avenue, even among Boston-area players, but his decision is conspicuous for its immediacy after Trump’s election; the public friendship Trump has with Patriots quarterback Tom Brady, coach Bill Belichick, and owner Robert Kraft; and the overtly political message he’s sending. (Trump, it was reported, didn’t have faith in his friends’ comeback, leaving his own Super Bowl party at 8:57 p.m., when the Falcons led 28-3.)

Just as many sportswriters are refusing to “stick to sports,” more athletes are growing politically active. Look no further than LeBron James for that, and Bennett likely won’t be the last of the athlete class to avoid D.C. with a president like Trump in office—but his act is likely to be greeted with more acceptance than some of his predecessors given the broad and growing movement against Trump.

It’ll be interesting to see what, if any, comment the Patriots make about Bennett not joining them for the trip, especially after media and team officials pilloried Boston Bruins goaltender Tim Thomas when he boycotted a trip see Obama after winning the 2011 Stanley Cup.

“I believe the Federal government has grown out of control, threatening the Rights, Liberties, and Property of the People. This is being done at the Executive, Legislative, and Judicial level. This is in direct opposition to the Constitution and the Founding Fathers vision for the Federal government,” Thomas wrote in an explanatory statement. “Because I believe this, today I exercised my right as a Free Citizen, and did not visit the White House. This was not about politics or party, as in my opinion both parties are responsible for the situation we are in as a country. This was about a choice I had to make as an INDIVIDUAL.”

Well, that didn’t sit well with Bruins brass. A team source branded the move as “[expletive] selfish [expletive]” to the Boston Globe.

Athletes have grandstanded over any number of issues. Ravens center Matt Birk, who is a Catholic active in the pro-life movement, declined a trip to see Obama. Golfer Tom Lehman once chose not to visit Bill Clinton because he said the president was a “draft-dodging baby killer.”

Former NBA great Larry Bird once said about Ronald Reagan, “If the president wants to see me, he knows where to find me.” Michael Jordan used the family excuse once: “As you know, my schedules have been very hectic. You guys have seen me, I’ve been every which way, and because I choose to take my private three days somewhere no one can call me, it’s my prerogative,” he said. “How can I be disrespecting the president when I choose to spend time with my family?”

When there are extenuating circumstances, it’s easy to ascribe motive. After the 2016 election, Cubs pitcher Jake Arrieta tweeted that Hollywood should “pony up and head for the border” to make good on promises to leave if Trump won. Then, when the Cubs visited the White House while Obama was still in office, he cited family matters to bow out.

Brady has tried claiming that he’s apolitical: He’s friends with Trump and once had a “Make America Great Again” hat in his locker, but declined to say whether he actually voted for Trump. His absence from a 2015 visit to President Barack Obama—despite having gone to see President George W. Bush after each of New England’s first three Super Bowl titles—was less tinged with politics. He cited a “family commitment” as the reason why, with a source close to Brady planting this nugget in the Boston Herald: “I think Tom just has so few free days, he didn’t want to use one.”

But ESPN reported that Brady spent at least part of that day at the team’s Gillette Stadium facility, fueling speculation that something more was at play. This was the halcyon days of Deflategate, and White House press secretary Josh Earnest had lampooned Brady’s press conference performance denying the charges.

“For years it’s been clear that there is no risk that I was going to take Tom Brady’s job as quarterback of the New England Patriots,” Earnest said then. “But I can tell you, as of today, it’s pretty clear that there’s no risk of him taking my job either.”

Maybe that dig, in addition to all the other public derision, made Brady want to recede into the shadows for a bit. Even Obama made a groan-inducing Deflategate quip: “I usually tell a lot of jokes at these events. But with the Patriots in town I was worried that 11 out of 12 of them would fall flat.” Obama then backtracked, noting, “That whole story got blown a little out of proportion.”

Not just Deflategate: whether an athlete chooses to make the ceremonial White House victory lap is a storyline touted beyond its merits, too. Athletes are free to voice or not voice their political leanings as they see fit or spend their private time with family, if they’d prefer.

Honesty and common sense are all that’s asked, which is more than can be said for Steelers linebacker James Harrison, who opted out of two White House visits in 2006 and 2009. In 2009, he said, “If you want to see the Pittsburgh Steelers, invite us when we don’t win the Super Bowl,” he said. “As far as I’m concerned, [Obama] would’ve invited Arizona if they had won.”

Right. That’s how this works.