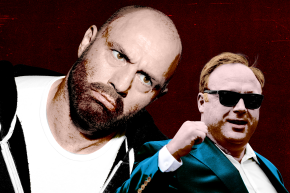 Hot dogs are code for male prostitutes, Bill Gates controls the weather, and so much more

On Wednesday, Joe Rogan, stand-up comic, Teen Choice Award winner, transphobe, and UFC color commentator, invited Alex Jones, America’s preeminent tinfoil-hatted conspiracy monger, to join him on his popular podcast for a nice, two-hour chat. Or, as a promotional poster described it, an “epic meeting of the minds.”

According to Jones, the two have been friends since 1998 and Rogan has scored him a few tickets to MMA fights over the years, but Rogan claims their friendship only began about 10 years ago. Still, Rogan believes “70 to 80 percent” of the things that come roaring out of Jones’ spittle-flecked mouth, a degree of trust that he might have in common with the current president. This is extremely bad. Worse than gay frogs.

Naturally, there were some takes. At Vocativ, we appreciate the value of a good, strong take. When combined with Rogan’s MMA bona fides, we feel comfortable stating that this podcast is sports, and after watching most of the three hour and 46-minute-long conversation, I feel like I’ve been concussed.

Also, according to Rogan, he, Jones, and fellow guest Eddie Bravo, were all “high as fuck.” So without further ado, here are some of the most braindead takes they had to offer.

ALEX JONES: “There has been a counter-coup through the electoral process in our country, and that’s what WikiLeaks was. That wasn’t the Russians. That was U.S. intelligence agencies.”

On Pizzagate and male prostitutes:

JONES: “President Obama wants 65,000 dollars in hot dogs delivered. And they’re like, ‘Are these really good hot dogs? the hot dogs weren’t as good last time?’ ‘Well these are succulent hot dogs.’ Okay, so that’s not about kids.”

JOE ROGAN: “So what is that about?”

On the psychic vampires:

ROGAN: “Megyn Kelly is so pretty she can say whatever the fuck she wants.”

JONES: “I think she looks like an old tranny… No, I just wanted to insult her because she’s a globalist. Obviously she’s pretty.”

How the United States created fake footage of the moon landing with the help of Stanley Kubrick to cover up the secret secondary space program, which has discovered an obelisk-like object similar to the one in the movie “2001” on one of the moons of Mars, which is actually a ball of ice and a future home for ‘the elites’:

JONES (shouting): “Because they put a fake launch in space in case the real mission died! And they’re not going to show you the real crap they got!”

On the weather wars, the technology for which has been developed, patented, and owned by Bill and Melinda Gates:

On, as Jones calls it, ‘the big enchilada’:

JONES: “Joe, there are aliens in this room right now. You’re the alien… It’s a vampire conspiracy in that they are inter-dimensionally sucking the essence of our youth and they believe they are possessed by an off-world entity… I’ve studied the elite, and I also communicate with a lot of the top people, and if you want to know, I will actually break down the best knowledge of what’s happening on the planet.

[Jones takes a deep breath. Everyone reading this should as well.]

JONES: “Let me give you a basic gestalt.. The elite are all about transcendence and living forever and the secrets of the universe… we’re on this planet and Einstein’s physics show and Max Planck’s physics show there’s at least 12 dimensions, and now that’s all the top scientists and billionaires are coming out saying it’s a false hologram; it is artificial. The computers are scanning it and finding tension points where it’s artificially projected and gravity’s bleeding in to this universe. That’s what they call ‘dark matter.’ So we’re like a thought or a dream that’s a wisp in some computer program, some god’s mind, whatever. They’re proving it all. It’s all coming out. There’s like this sub-transmission zone below the third dimension that’s just turned over to the most horrible things – that’s what it resonates to. And it’s just trying to get up into the third dimension that’s just a basic-level consciousness to launch into the next levels.

And our species is already way up into the fifth, sixth dimension, consciously, our best people. But there’s this big war trying to like basically destroy humanity because like humanity has free will. And there’s a decision to which level we want to go to.

And the elites themselves believe they’re racing, using human technology to try to take our best minds and build some type of breakaway civilization where they’re going to merge with machines to transcend and break away from the failed species that is man… Google was set up 18, 19 years ago… that they wanted to build a giant artificial system and Google believes that the first artificial intelligence will be a supercomputer based on the neuron activities of the hive mind of humanity with billions of people wired into it with the internet of things… so they will have current prediction powers, future prediction powers, a true crystal ball… And so then it’s the end of consciousness.

Damn, strong. You can watch the entire podcast here.