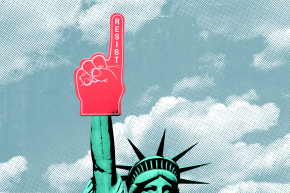 Actually, don't ever stick to sports

If there was even a shred of doubt remaining, the last two weeks have definitively proven that the only way to stop the carnage Donald Trump and his horde of Failsons, white nationalists, and bootlicking GOP enablers want to bring about is if we, the people, take action.

Last weekend, a group of sports writers and agents ditched any pretense of Sticking To Sports, using their social media clout to raise funds for the ACLU. Like any successful online campaign, an original idea was picked up and mimicked, not out of some misguided need for a quick endorphin hit of likes and RTs, but because it was a simple and effective tactic. What’s more, remaining silent can’t be seen as anything but a tacit endorsement of the alternately terrifying and enraging status quo.

It began on Saturday when Nate Jones, an agent at Goodwin Sports Management, raffled off three pairs of still-in-the-box sneakers, seeking 30 followers who could offer proof they’d made a $50 donation to the ACLU.

I've got 3 colorways of the Human Race NMD pack in a 12.5 I'm gonna raffle off to raise money for @ACLU today. pic.twitter.com/6GZaSlhuzb

He ended up raising more than the original $1500 he intended, after one follower made a $500 donation and turned down the prize.

Jones’ raffle caught the eye of three sports writers: Adam Reisinger, who has worked for ESPN for more than a decade and currently serves as a senior editor for ESPN.com’s live content group, Jared Dubin, a lawyer and writer for multiple sites, and Tommy Beer, a senior NBA Analyst at Basketball Insiders and contributing writer for NBC/Rotoworld.com.

They all claimed Jones’ raffle inspired their own, though they expanded the size and scope. Dubin initially asked for a smaller initial donation from 100 followers.

Taking @JonesOnTheNBA lead, first 100 people to donate $5+ to @ACLU I'll do a drawing for this throwback NBA poster. pic.twitter.com/JiJOME7XBA

He ended up raising $3,120 and then doubled down on Monday, offering yet another item, though Dubin said when reached by email that he hasn’t tabulated the total amount raised from the second raffle.

So, to be clear: send a screen shot of a NEW $5+ donation to @aclu and you can win these @partricktruby drawings. Already at $150 raised. pic.twitter.com/0fA9FVKfgk

Reisinger and Beer followed suit Saturday night and Sunday morning, raising over $5,000 and $3,161, respectively, far more than either of them anticipated.

Inspired by @JonesOnTheNBA and @JADubin5 first 100 people to donate $10+ to @ACLU I'll do a drawing for this Hakeem Olajuwon signed HOF ball pic.twitter.com/gHEmgAg1Ky

The first 200 people to donate $5 or more to @ACLU will be entered into a drawing to win this Starter coat signed by members of '94 Knicks: pic.twitter.com/sYMg2qmXZg

As to the reasons why they were inspired to pursue online activism, all the participants specifically pointed to the president’s temporary (for now) executive order banning individuals from seven predominantly-Muslim countries from entering the U.S.

“It’s extraordinarily difficult to condense all of my thoughts on the EO into something that’s not an entire article in and of itself so I’ll instead simply say that I think it’s an atrocity. Actually, I’ll expand on that: it runs counter to everything our country purports to stand for and the very idea of religious freedom on which it was founded.” Dubin said.

“I’m Jewish so I know the people that are doing this will come for me eventually, but I’m also a white man that was born in this country so I’ll be able to hide in plain sight for a while,” he continued. “Other people aren’t so lucky and are already being targeted.”

Echoing the concerns of many national security experts, Beer said via email, “Not only do I personally believe that these extreme measures are un-American and immoral, I am of the opinion that they ultimately actually increase the odds of terrorists attacking American interests at home or abroad… Letting fear and anger cloud one’s judgment momentarily is understandable, but that’s not what this country was founded on.”

Though more and more sports writers are ditching the pretense that their politics should never enter their writing, let alone should be kept out of their social media feed, for the most part, they were not concerned that they’d lose readers or that their various employers might scold them for their actions.

“I didn’t think about that at all,” Reisinger said by email. “I don’t mean that flippantly, like, ‘I don’t care what my employer thinks, I’m doing this anyway.’ I mean it literally. It just did not cross my mind. Should it have? Maybe.”

Beer was somewhat “apprehensive,” he said, largely because his Twitter feed had been practically politics-free prior to last Sunday. The followers he has attracted to date were there for his knowledge of basketball, adding that he remained steadfast in his belief that sports can and should serve as a healthy diversion, a way to unplug and escape from “things that really matter.”

However, Beer believes now is not that time. “I felt that America was in such a uniquely dire, perilous, and serious situation that I could no longer afford to sit back and be quiet. My conscience propelled me to say or do something,” he said. “So, yeah, I was initially worried about the reaction of my employers, as well as the reaction of my followers, because I had never previously dipped my toe in this end of the pool. Fortunately, I didn’t receive even the slightest bit of blowback from my bosses.”

For all, the online response was overwhelmingly positive. Still, given that the medium itself almost always assures a percentage of often anonymous rage will accompany even the tamest political statement, “There were a few folks that hit me with the ol’ #StickToSports or worse: ‘Why would you want to support people who defend terrorists!!’” Beer said.

Spencer Hall, editor-at-large for SB Nation, did not conduct a raffle, but for the last decade he has held an annual fundraiser at the site he founded, Every Day Should Be Saturday, for New American Pathways, an Atlanta-based non-profit that serves the needs of the refugee community. Given the current political climate, it’s not surprising that this was his most successful year to date, raising over $40,000, he said when reached by email.

As to why he selected New American Pathways, “I owe the refugee community in Clarkston a lot for what they taught me,” he said. “There is also the not-insignificant point about being a nation of immigrants who need to pay that debt of gratitude forward—especially towards refugees, the people who come here with the least, and yet often contribute so much to their new communities.

Like Dubin, Beer, and Reisinger, Hall was repulsed by Trump’s executive order. He made it clear that his words were not meant to be taken as representing New American Pathways, but did say of the executive order, “It’s a vile appeal to a repellent, regressive, and vicious strain of nativism.”

“The complete refugee ban in particular makes no sense, does nothing to make us safer, and gives people the wrong idea about the existing process refugees already go through on entering the program. It takes anywhere from a year and a half to two years to even get here, and they wait in some truly, truly miserable conditions. Anything more ‘extreme’ than the current vetting borders on sadism.”