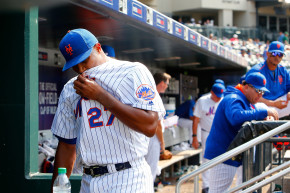 This will keep on happening

Early in  the morning on October 31, 2016, police arrived at the home of New York Mets closer Jeurys Familia to discover his wife, Bianca Rivas, had scratches to her chest and a bruised right cheek. Familia was arrested and charged with simple assault, although the police report stated that there was enough evidence discovered at the scene to indicate an act of “domestic violence had occurred,” and during Rivas’ 911 call, she told the dispatcher that Familia was “drunk” and was “going crazy.”

The case was dropped on December 15, when Rivas refused to cooperate with the prosecutors, telling the presiding judge that she did not wish to press charges. Though Familia’s record was expunged, Major League Baseball continued to conduct its own investigation as part of its Domestic Violence, Sexual Assault and Child Abuse Policy, but sources told Bob Klapisch they’re not coming up with much.

Via the Bergen Record:

Major league officials admit they’re frustrated at how slowly the investigation is moving. Said one higher-up, “Everyone on (Familia’s) side has clammed up.”

MLB has been rebuffed in its attempts to learn more and, specifically, whether Rivas felt pressured to ask for a dismissal. With spring training right around the corner, investigators have resigned themselves to being shut out, yet there’s no chance Manfred will let Familia off the hook.

Following an arrest prior to the start of the 2016 season, Aroldis Chapman received a 30-game suspension and Jose Reyes was held out for 51 game even though the charges against both players were ultimately dropped. Reyes allegedly choked his wife and slammed her into a glass wall, though, like Rivas, she declined to cooperate with prosecutors. Similarly, Chapman allegedly fired gunshots into the air and choked his former girlfriend, but the case ended when prosecutors cited “conflicting stories” and a “lack of cooperation” from all the parties involved.

Sources further told Klapisch that the failures of law enforcement with regards to domestic violence have proven “frustrating” to MLB commissioner Rob Manfred.

Manfred has told associates he’s frustrated by the courts’ inability to prosecute such high-profile cases. “They leave it to (MLB) to do the right thing,” said one confidante.

And while his frustration may be understandable, a professional sports league should not see the failures of law enforcement as reason to take up the mantle and serve as a de-facto police force and judiciary. She’s far from alone, but take the example of Molly Brown, who was repeatedly abused by her ex-husband, former New York Giants kicker, Josh Brown. Despite multiple calls to the police, it took years before an arrest was made. The NFL levied a one-game suspension (regardless of its revised rules in the wake of the Ray Rice case), the Giants moved heaven and earth to cover for him, and the league more or less blamed the light punishment on Molly, given her lack of cooperation with their investigators. Said investigators also so disturbed Molly that she was compelled to call the police.

What’s more, we know that serious, career-threatening suspensions—no matter how much fans may want to see some kind of justice done or a pro sports league may want to paint itself as a righteous defender of women—could actually make victim’s lives worse. As Cindy Southworth, the executive vice president of the National Network to End Domestic Violence, explained to The New York Times when Reyes’ suspension came to an end, the greater the punishment, the higher the likelihood that a victim will refuse to cooperate or even contact the police, fearing that the loss of income would result in further acts of violence. “It would create huge, unfathomable pressure not to call 911 if they knew their loved one’s career would be in jeopardy,” she said.

So it should come as a surprise to no one that Rivas isn’t talking with Manfred’s private sleuths. Whatever they might uncover, it won’t help her.