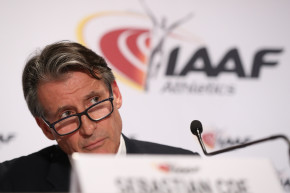 God, can no one keep their story straight anymore?

When Coe testified before the committee in December 2015, he claimed the first he’d heard of specific details of the widespread, state-sponsored Russian doping program was after he’d watched Hajo Seppelt’s documentary investigation.

“I was certainly not aware of the specific allegations that has been made around the corruption of anti-doping processes in Russia,” he said. In Seppelt’s report, runner Liliya Shobukhova alleges that she paid a $450,000 bribe in order to cover up failed tests that would have barred her from competing at the 2012 Games in London.

But while attending the European Track and Field Championships, Coe sent an email on August 14, 2014 to Michael Beliof, the chair of the IAAF’s Ethics Board on Doping, saying he’d received copies of unspecified “documentation” detailing Shobukhova’s allegations. The documentation in question was sent by David Bedford, the former director of the London Marathon.

“I have spoken to David [Bedford] today on the phone and he advises me that he has shared this information with you. Should I forward this documentation to you?” Coe wrote.“The purpose of this note is of course to advise you that I have now been made aware of the allegations.” In a four-page letter sent on Thursday to Damian Collins, a member of parliament and the chairman of the Culture, Media and Sport Select Committee, Coe claimed he did not mislead the committee at all.

“There is in fact no discrepancy,” he says. “I was not asked by your Committee when I first knew about the allegations that persons at the IAAF were involved in the cover up of Russian doping cases, and I have made clear I did not read David Bedford’s emailed documents but asked my office to forward them to the person and the Commission with exclusive authority to investigate, in accordance with my obligations under the IAAF Ethics Code then in force. As such there are no grounds for suggesting I misled the Committee in any way in December 2015.”

So, when he said he was aware, he was in fact not aware because he didn’t thoroughly study the documentation he’d received. Also, he was kind of busy.

“I was out of the country for most of August 2014,” Coe writes. “I tend not to go through emails myself, particularly when I am on holiday with my family. Instead I speak to my office and they tell me what has come in.”

To date, Coe has refused to return before the committee to provide further testimony, explain what he knew and when he knew it, or if he can define the word “aware.”