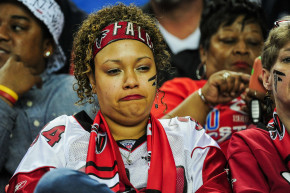 New evidence introduced in a class-action lawsuit filed against the 32 NFL franchises over improper painkiller administration noted that Atlanta Falcons owner Arthur Blank and top team executives were aware of potentially “excessive” use. Just how excessive? Almost triple the mean league expenditure on such medication, the Associated Press reported.

The AP cited an email chain from 2010 in which Blank, president Rich McKay, general manager Thomas Dimitroff, and current director of sports medicine Marty Lauzon—all still with the team that will play the New England Patriots in Sunday’s Super Bowl—discussed the ramifications of an external review that noted the Falcons’ $81,000 in expenses on painkillers far exceeded the NFL average. The audit, by SportPharm, was said to have included the phrases “excessive dispensation” of narcotics and other pills, which could lead to a “culture of dependency.”

“That’s being litigated now,” Dimitroff told the AP on Monday. “That’s not something we’re going discuss right now. When the time is right, we’ll readdress that.”

Lauzon wrote that “players at the end of their careers going through medical issues” might go to the press and “say they abused or are now addicted” because of how the painkillers were dispensed. He said the team was almost the target of a DEA investigation due to “improper billing issues.” (Lauzon joined the team as head trainer after the SportPharm review.)

There is no allegation that Atlanta broke any league rules, and Dimitroff forwarded Lauzon’s note to Blank the same day, calling the issue “quite important” and “a rather sensitive subject” that “needs to be handled in a correct and expeditious manner.”

The original contention of that lawsuit, currently being heard in California’s Northern District, is that NFL teams were careless in the way the painkillers were given to players.

“Players from around the country describe the same thing – Club doctors and trainers providing injections or pills, not telling the players what they were receiving, misstating the effects of the Medications (if they addressed the effects at all), and not talking about the need for informed consent or the long-term effects of what they were taking,” the complaint said. “These doctors and trainers dispensed the Medications to their football patients in an amount and manner they would never do with their non- football patients.

“. . . Instead, the Clubs have resolved this inherent conflict in favor of profit over safety with more games, less rest (e.g., Thursday night football), and smaller rosters that save payroll expenses. And they achieve their ends through a business plan in which every Club employee – general managers, coaches, doctors, trainers and players – has a financial interest in returning players to the game as soon as possible. Everyone’s job and salary depend on this simple fact. The return to play culture was based on four cornerstone concepts: profit, media, non-guaranteed contracts, and drugs.”

It’s unclear how the Falcons’ painkiller usage has compared in ensuing seasons, but its 2009 distribution was nothing short of gigantic. Perhaps the most damning comment in Lauzon’s email is that the team’s allocation of pain meds “goes against healthy lifestyles and care, even for an NFL player.” The phrase “even for an NFL player” is quite the qualifier and right in line with the suit’s allegations.