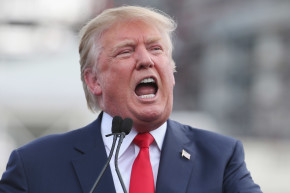 The U.S. Olympic Committee said Monday that the government had given assurances that international athletes would be given “expedited access to the United States in order to participate in international athletic competitions,” but at least one competitor has already run afoul of that pledge.

Icelandic taekwondo athlete, Meisam Rafiei, was denied passage into the country for the U.S. Open Taekwondo Championships in Las Vegas because he was born in Iran. (He is a dual citizen.) Rafiei told ESPN on Tuesday morning that being led off the plane after the cabin had already boarded was “a difficult moment.” That said, he reported having had contact with the USA Taekwondo president, who was apologetic and encouraging about finding a remedy.

Trump has been a vocal backer of Los Angeles’ 2024 Olympic bid, support that could prove detrimental to the cause. An anonymous U.S Olympic official told USA Today that this executive order is not helping L.A.’s chances, and one Olympic historian, Alma College professor Derick Hulme, told the L.A. Daily News that Trump’s first 10 days have been a “catastrophe” for the bid. One International Olympic Committee member, Richard Peterkin of St. Lucia, said the act was “contrary to Olympic ideals,” but later added that it was “far too early to judge” whether this would impact his vote. (The IOC is expected to decide in September between Paris, Los Angeles, and Budapest.)

Indeed, the Olympic charter is pretty clear about the inherent ideals implied within the Games. Among other explicit values is this one: “The goal of Olympism is to place sport at the service of the harmonious development of humankind, with a view to promoting a peaceful society concerned with the preservation of human dignity.” Then again, the IOC has recently awarded Games to China and Russia, so it’s not that picky.

The USOC, in early damage-control mode, recognized this and made sure to say in its statement, “Like the United States, the Olympic Movement was founded based upon notions of diversity and inclusion, of opportunity and overcoming adversity.”

It’s not just the immigration restrictions that could hurt the U.S., either. Trump’s withdrawal from the Trans-Pacific Partnership could economically hurt a number of countries with IOC members, the L.A. Times noted. One now wonders if other international events—World Cup archery and cycling events already on the docket for 2017, not to mention America’s bid for soccer’s 2026 World Cup—all could be subject to change, as a result. (Then again, like the IOC, it should be noted, FIFA hasn’t been too choosy about its World Cup sites with Russia and Qatar set to host the next two tournaments.)

While Rafiei, the taekwondo competitor, said he was not angry and added, “I only know good things about America,” another Iran native—MMA fighter Gegard Mousasi, who said he also has Dutch nationality—was more critical of how the ban could affect his scheduled UFC 210 bout in April, to be held in Buffalo.

Mousasi told Telesport (with Google translation by Fansided), “This [ban] is not the right direction. There seems to me a bit too much turmoil in the world, and this is certainly not a positive way. For years there were working relationships between countries, and now with Trump, there go all the years that worked for peace. I think he’s a bit of an arrogant guy, he does things his way, but I think he has little understanding of politics.”

His voice joins the legions of other athletes who have promptly voiced disapproval of the executive order. International sports’ decision-makers and power-brokers are likely to follow suit.