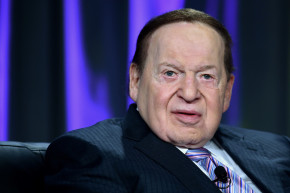 Turns out you can't rely on Sheldon Adelson

Sheldon Adelson before taking on his final reptilian form — Getty Images
By Robert Silverman
Jan 31, 2017 at 11:11 AM ET

Casino magnate and conservative sugar daddy Sheldon Adelson will not be investing $650 million in a proposed stadium in Las Vegas to house the (for now) Oakland Raiders, according to multiple reports.

Back in October 2016, the Nevada state legislature voted to approve a 30-year increase of taxes on hotel visitors in order to generate a $750 million bond to finance the construction of a $1.9 billion stadium and adjacent convention center. The Raiders had agreed to pay $500 million, but they’ve been trying to squeeze a few more ducats out of the proposed deal. On Friday, the lease agreement submitted to the Las Vegas Stadium Authority called for the team to only pay $1 dollar a year in rent and keep all the profits generated by advertising sales and naming rights, a sweetheart arrangement that was not mentioned when Nevada originally agreed to dole out millions in taxpayer dollars.

That could amount to some serious revenue, considering that some NFL teams with fancy new places to call home, like the San Francisco 49ers, pay $20 million per year. The Raiders’ 11th hour maneuver didn’t sit to well with Adelson, apparently. Via the Nevada Independent:

“It’s clear the Raiders have decided their path for moving to Las Vegas does not include the Adelson family,” Sheldon Adelson said in the statement. “So, regrettably, we will no longer be involved in any facet of the stadium discussion.”

Adelson blamed conditions named in a 117-page proposed stadium draft agreement, which the team presented at a meeting of the nine-member Las Vegas Stadium Authority last week. He said the draft proposal, which called for terms including $1 annual rent, control over field scheduling and exclusive naming rights for the team, sent “shockwaves” through the community and was a surprise to his family.

“We were not only excluded from the proposed agreement; we weren’t even aware of its existence,” he said in the statement.

An editorial in the Las Vegas Review-Journal blames the NFL, accusing the league of trying to remove Adelson as a potential partner. It’s also worth noting that Adelson owns the Review-Journal, and as Mother Jones reported, the purchase was made in part to scuttle critical reporting and to provide him with a mouthpiece to investigate and attack political opponents, including a judge presiding over a wrongful-termination lawsuit brought against Adelson. Multiple editors and reporters have since resigned in protest, citing Adelson’s attempts to skew the newspaper’s coverage.

Take that with as much Morton’s as you like, but back to the shiny new stadium. Government officials, many of whom backed the stadium funding plan, told the Independent that Adelson’s departure could lead to the collapse of the entire project.

“This is not a wrench in the wheel, the wheel fell off,” Clark County Commission chair Steve Sisolak said. “This is an enormous setback in my opinion.”

And while the Raiders have said that Goldman Sachs is ready to jump in should Adelson bail, Sisolak isn’t so sure.

“The Raiders are putting a lot of hopes in the Goldman Sachs commitments, but I don’t know the extent of their commitments, and I certainly do not share that same level of hope,” he said. “If [the Raiders] have a Plan B, I’m not aware of it, and the owners meeting is coming up in two months.”

To clarify, unlike Adelson, Goldman Sachs would provide financing towards the stadium which would be paid back over time. Adelson’s bid was for a partial ownership of the stadium and a percentage of the total profits. Whether this might work to the Raiders financial benefit in the long haul remains unknown, but an unnamed source told Pro Football Talk that the Raiders will need more than an ur-powerful transnational bank in order to make the stadium in Vegas a reality.

Meanwhile, NFL owners will be voting in March to approve the Raiders’ relocation bid. Should they fail, Oakland is waiting in the wings. In December, the Oakland City Council voted to give away land valued at $150 million and pay out an additional $200 million in infrastructure improvements as part of a $1.3 billion dollar stadium package that would keep the Raiders in the Bay Area.

Which municipality will end up getting screwed? Stay tuned!

UPDATE: Yahoo is reporting that Goldman Sachs is pulling out as well and that their agreement to finance the deal was dependent on Adelson’s participation, contrary to what the Raiders told the NFL and was reported by the Review-Journal.