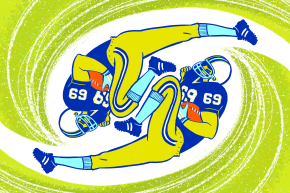 That the number 69 will always be funny as hell is inarguable. Unfortunately, the sporting world is bereft of athletes who’ve donned the internet’s favorite number on their jerseys. Just two NHL players have ever worn it, no one in the history of the NBA ever has, and only a handful of major leaguers have ever done so. In the NFL, however, regulations stipulate that offensive linemen can only select a number between 60 and 79 and defensive lineman must pick one between 60 and 79 or 90 and 99. As a result, more than a few players over the years have rocked the sex number.

Naturally, Vocativ reached out to more than 30 current and retired players to see if they wanted to chat about a life with 69 plastered across the front of their work duds. Despite multiple calls and emails to players and their respective agents, most were not returned. Perhaps the most surprising silence came from retired NFL journeyman Evan Mathis, who once tacked an additional 69 cents on the end of a free agent contract just for the fun of it. (Through a public records search, I did learn that many of these players at one time used now-dead email addresses which included their nickname and 69, because of course they did.)

Thankfully, two fine gentlemen did answer the call of 69.

The first being Rich Seubert, who played offensive guard for the New York Giants for 10 seasons. Originally an undrafted free agent, he came back from a series of leg injuries to secure a starting role and even has a Super Bowl ring to his name. Since his retirement in 2010, he’s taken over the head coaching reins at Watchung Hills High School.

So, the obvious question, why did Seubert pick the number 69?

I took the bait and panicked. “No, no, no,” I said, practically stammering. “There’s nothing wrong with it, I was just wondering like… what made you pick it?

“I’m just messing around,” he said, bursting into laughter. “C’mon. You gotta have a little bit of fun, man! But only if you explain what 69 means to me. Then I’ll talk.”

Upon explaining that 69 is the sex number, Seubert kept true to his word and said that he was assigned the number 69 when he arrived at Giants training camp in 2001, possibly because the equipment manager wanted to ensure that the final roster remained sexy number-free. “I believe 69 is given to the kid that the equipment people think is not going to make the team,” he said. “So that way, after first cut, nobody’s number 69.”

Fortunately, he wasn’t cut, and any designs on changing his number were ditched soon after, partly thanks to his mom.

“I played for 10 years and once I made the team and my mom had that jersey, I was never going to switch my number,” he said. “I’m not going to switch it; it fit me well. I was a short, bigger fella, so 69 actually fit my chest nicely”

As for whether or not having the name of a sex act on both his chest and back got him any razzing from teammates, “No, we don’t care in the locker room,” Seubert said. “It’s more about some of the fans at training camp, they’ll yell out ‘It’s the number 69!’ or like ‘How’d you get that number?’ or silly stuff like that. I kind of just let it be ‘cause I didn’t want to get myself in trouble.”

According to Seubert, there was one demographic that always got what 69 is really about: kids.

“When I’d go to schools and talk, the principal would tell me, ‘The kids were told not to ask you your number because they don’t want all the kids to giggle in class.’

“Every once in a while you get that one kid in class who would be like, ‘Hey Mister Seubert, what’s your football number?’  And I would say it because I wasn’t even thinking by that time, and then some of the kids would giggle and they’d get pulled out of the class by the teacher or the principal.”

While educators clearly have an anti-69 bias, Seubert is far more forgiving. “It’s a funny number,” he said. “Whatever. It means what it means. But to me it was my football number so my kids would wear number 69.”

Like Seubert, Tim Krumrie, an All-Pro Cincinnati Bengals nose tackle who played 12 years in the NFL, spent his entire career with the number 69 emblazoned across his chest. Krumrie always wore the number with pride because, “I was just happy to have a number,” he said when reached by phone. And, like Seubert, he was never on the end of any locker room jokes about his number, “That was never a question, other than I was happy to have a number in my locker.”

Even to this day, when fans send Krumrie old football cards to be autographed, there’s never any mention of sexiness or a rude remark.

Krumrie’s association with 69 doesn’t end there, though. He also served as the Kansas City Chiefs defensive line coach during the career of one of the more prominent players to wear 69, Jared Allen.

Classic. Loved coaching him with @Chiefs. #69. Come on out to @steamboatsprings cowboy. https://t.co/zpB4Vur00V

Allen is also the author of “The Quarterback Killers Cookbook,” which is currently available for $9.69, so surely he’d want to discuss the important matter at hand. Through his agent, Allen said he wasn’t interested. However, Allen’s agent did confirm that the number was assigned to him, and that, like Seubert and Krumrie, no one ever busted his chops about it in the locker room or on the field.

All in all, it seems pro football players dig a more refined, high-brow brand of humor than myself and the rest of the internet.