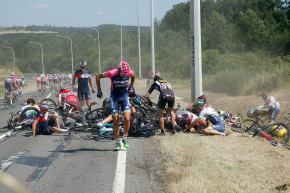 Report: Moto-Doping At The Tour De France
By Joe Lemire

Stefano Varjas, a Hungarian mechanic who has designed surreptitious motors for bicycles, said he sold motorized bikes to an anonymous client, with delivery arranged for a locked storage room in Beaulieu Sur Mer, France—just before the 2015 Tour de France.

This suspicions-raising claim was part of a CBS 60 Minutes report that aired Sunday night, in which both Varjas and and former French Anti-Doping Agency testing director Jean-Pierre Verdy said they were confident such motors have been used on the professional circuit, including in the Tour de France. In fact, informants apparently told Verdy that about 12 riders moto-doped in the 2015 Tour de France.

“They’re hurting their sport,” Verdy told the news program. “But human nature is like that. Man has always tried to find that magic potion.”

The tiny embedded motors add about 800 grams, or 1.7 pounds, according to Varjas; 60 Minutes reported that French authorities found only one set of bikes—belonging to British Team Sky—weighing more than the rest prior to a 2015 Tour de France time trial and they did so by about 800 grams. Sources told 60 Minutes that cycling officials wouldn’t allow separate weighing of Team Sky’s wheels.

Team Sky denied the allegation through a spokesman, suggesting that heavier bikes might be used for better aerodynamics, and Sir Dave Brailsford, Team Sky principal, told the Guardian last year of the rigorous testing they endure, adding that someone “stupid enough” to appear at the Tour de France with a motorized bike “for sure they will get caught.”

Inspections, thermal imagery, and weight checks have all been used to nab motor-dopers, which has been talked about as cycling’s latest scourge, though only one professional has ever been caught—a Belgian U23 rider, Femke Van den Driessche, who was later banned six years. Former Tour de France winner Greg LeMond and his wife, Kathy, even reportedly worked as informants for the French police.

They motors have generally avoided detection because these aren’t major engines that turn a two-wheeled machine into a full-fledged motorcycle, but rather small propulsive devices that can give riders short bursts. Varjas said he first invented the technology back in 1998 but was paid $2 million for it, with the provision that he cease further work and keep it secret for 10 years.

The French newspaper Le Monde wrote last month that the timeline could implicate Lance Armstrong, whose first Tour win came in 1999, though Armstrong has denied ever motor-doping or having met Varjas. And just to make this story more convoluted and connected to all the bold-faced names, Varjas also said in the 60 Minutes broadcast that he sold motorized bikes to Dr. Michele Ferrari—the Italian physician banned for life for crafting doping programs for Armstrong, among others. Ferrari denied this though admitted he tested a motorized bike once.

These are remarkable claims that could deal cycling yet another black eye if true, and the sport’s track record means it probably doesn’t deserve the benefit of the doubt.