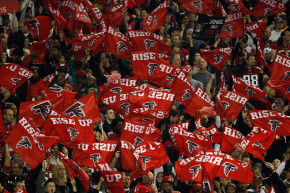 Rise Up Against Donald Trump . . . And Support The Falcons?
By Joe Lemire

Rise Up Against Donald Trump . . . And Support The Falcons?

In these days of Trump’s Muslim Ban, dissidents are using social media to inspire others to protest . . . and to pick sides for Sunday’s Super Bowl. You see, in simpler times—circa Week 1 of the NFL season—the Atlanta Falcons’ branded hashtag, #RiseUp, was merely a sophomoric joke.

As people tag their rally-cry tweets with all the appropriate searchable hashtags in solidarity with the refugees and immigrants affected by the president’s executive order, they are doing so with unexpected results. (Oddly, embedded tweets don’t show the emoji but clicking through reveals the situation.)

People are using a "Rise Up" hashtag to talk about refugee policy, and getting an Atlanta Falcons emoji pic.twitter.com/odoLQ1EuvV

@realDonaldTrump Grow a pair loser. Ur failures in construction are well documented now the world will know what a loser u are #RiseUp

Rise up and be heard. Your voice matters! #Riseup #Monday

@TheTodayShow ran footage of Trump protesters around the country. One group had #RiseUp signs. Protesters, or @AtlantaFalcons fans? #ATL

I reject Trump's hate! His purpose is to take control, to bring U.S.A. down, to dominate! Soon even his Party will be eliminated. #RiseUp

No, #Trump, Not on Our Watch. It Will Fall To Us,The American People To #RiseUp Together. https://t.co/2a9zW2enzU

There’s a certain relevance to this happenstance, of course, as the Patriots’ owner, coach, and quarterback—Bob Kraft, Bill Belichick, and Tom Brady—are all known friends of Trump, which for many is reason enough to rise up against New England.

So if I tweet #riseup about Trump, a falcon logo appears?

And I think Kelli Johnson speaks for all of us in reply: