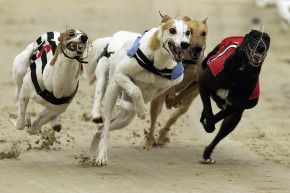 End this barbaric relic of a sport now

Despite the best efforts of the world doping cops, drug prohibition does not and cannot succeed. As has been the case throughout the entire history of competitive sports, athletes will imbibe all sorts of prohibited substances if they think it might provide a tiny competitive advantage.

But human athletes are at least allowed to make that choice for themselves. Not so for racing dogs, who are subject to the cruel whims of their owners and trainers. According to the Guardian, between May and September 2016, 51 trainers from Greyhound Racing New South Wales were caught injecting dogs with all manner of performance-enhancing drugs, including steroids, stimulants, and painkillers.

The cases, which relate only to trainers who were charged, all detail offences that occurred after former high court judge Michael McHugh began his inquiry into the greyhound industry.

That inquiry led former premier Mike Baird to ban the industry in July last year, before spectacularly reversing his decision in October.

The penalties for the 51 doping offences ranged from a $500 fine for the use of morphine, codeine and norcodeine, to a 16-month racing suspension for the detection of anabolic steroids in the same greyhound three times in late 2015.

Cobalt, a potentially dangerous substance that can help dogs perform at peak level for longer, was detected in greyhounds in a dozen cases.

One member of the New South Wales parliament is demanding that the newly-elected premier, Gladys Berejiklian, shut down greyhound racing altogether. “Faced with overwhelming evidence of animal cruelty, if Premier Berejiklian has any integrity she must keep the ban in place,” said MP Mehreen Faruqi. “That is the only option.”

To date, Berejiklian has said she would uphold former premier Baird’s decision. But make no mistake, atempts to curb the use of PEDs or instill meaningful reform will not happen as long as there’s money to be made. In Great Britain alone, it’s a multi-billion-dollar industry powered by gambling profits and race-fixers, all of whom have a vested financial interest in finding ways to dodge the PED regulators.

A 2014 undercover investigation by the BBC showed one trainer injecting dogs and then betting on the fixed races himself, earning £150,000 for his troubles. The trainer did say that he had to wait a few months before subjecting a dog to another round of PEDs. If not, “You will burn her kidneys out,” he said.

Same goes for Australia, where a 2013 report outlined similar, horrific conditions: dogs were often given cocaine ; regulators soft-pedaling any attempts at reform; puppies that are drowned if they’re not deemed up to snuff; and euthanasia is an all-too-common and brutal form of ‘retirement.’ According to one long-time trainer, doping is so rampant, the idea of a clean race is a joke. “Eighty per cent of greyhound trainers are looking for something to dope their dogs.” he said.

In America, dog racing has been banned in all but six states: Alabama, Arkansas, Florida, Iowa, Texas and West Virginia. PETA and the ASPCA have spent years campaigning for an outright ban, but to no avail. And yes, all the issues that plague dog racing abroad can be found stateside.

If you’re still a fan of this “sport,” please stop. Making animals run for our entertainment is, as MP Faruqi said, an act of “barbaric cruelty.”