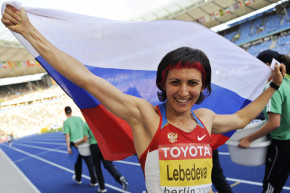 “The report contains a lot of untrue facts and any court would reject it at once,” she said to Vestnik Kavkaza. “There is no clear evidence.”

In fact, Lebedeva has spent the past year and a half blasting the WADA and the investigations into her country’s doping crisis as the politically-motivated actions “of the Anglo-Saxon lobby.” Coming from a five-time Olympic medalist and committee member for the governing body of international track and field, those were strong words.

Er, make that three-time Olympic medalist. And suspended committee member. She doth protested too much.

Lebedeva, 40, competed in four consecutive Olympics, from 2000 through 2012, and had earned medals in each of the first three Games in long jump and triple jump. A re-analysis of her B samples from the 2008 Beijing Games, however, discovered the presence of the steroid turinabol, leading to an immediate forfeiture of her two silver medals from that year.

She told the state-run TASS news agency that she would be appealing, saying, “I have been always fighting until the very end.”

Few have been as outspoken as Lebedeva, who was elected senator in 2014. Her boldest accusation came in May, when she told RIA Novosti, “As much as I’d like to say that it has nothing to do with politics, it’s not true. These are the actions of the Anglo-Saxon lobby. They see that sanctions are not bringing the desirable results and so they start to attack our strong positions, including sports and music.”

That month, she also added some conspiratorial theories in a story on the Russian track federation’s website, suggesting that WADA would “abuse” the collected samples, using the DNA for any number of nefarious purposes “right up to fantastic stories in which from the biological material of elite athletes they clone a superhuman.”

Despite Lebedeva’s quite meaty conspiracy takes, the problem of Russian state-sponsored doping goes on.

Though Russian track and field athletes are barred from international competition, there is an ongoing domestic winter tour. At a small meet in Orenburg earlier this week, the Russian athletics federation “established the fact of a mass withdrawal of athletes due to possible doping controls at one of the ARAF Winter Tour events.”

This was not an isolated incident, either, noted the Associated Press: “Since the British drug-testing agency started collecting samples in Russia last year, it has reported athletes trying to avoid testing by withdrawing from races, providing fake urine or simply running away.”