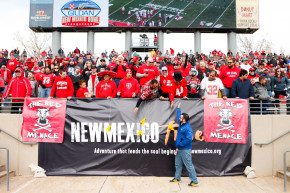 One Reporter Has The University of New Mexico Freaking Out

Naturally, the school's response to unfavorable revelations is to kill transparency

Paul Krebs, the University of New Mexico’s athletic director, is trying to clamp down on leaks and and shutter a legitimate journalistic investigation into the athletic program, according to a report by Daniel Libit, the sole proprietor of the site, NMFishbowl.com.

On January 12, Libit published an article based on exit interviews with senior UNM athletes conducted at the conclusion of the 2014-15 and 2015-16 season. The conversations between students and a UNM faculty committee were acquired by NMFishbowl via a public records request and recorded anonymously so as to allow students to speak freely.

In the published documents, athletes allege that the athletic department infringed on their academic freedom; hindered their ability to take classes that conflicted with the needs of the various teams; claimed that they were asked to pay expensive medical bills; papers were written for athletes by academic advisers; and that UNM may have violated the NCAA’s rules regarding the number of permissible practice hours.

Athletes who competed in cross-country, skiing, track and field, volleyball, and soccer, who comprised a “substantial portion” of the interviewees, say they were treated like second-class citizens in comparison to members of the football and basketball team, and were denied access to training facilities.

One student claimed a professor told her, “All you black female athletes look alike,” and that many racial slurs were overheard both in the classroom and on the playing fields. Female athletes were also subject to dietary restrictions and constant reminders about their weight, with one trainer allegedly calling an athlete a “Dorito-eater.” (These dietary restrictions were not imposed upon male athletes, according to UNMFishbowl.)

In a statement, UNM athletics spokesman Frank Mercogliano did not refute the content of the exit interviews. He did assert that, “The confidential student-athlete exit interviews are conducted to better our athletic program and the student-athlete experience.” It is unclear what steps, if any, UNM has taken to address the issues raised, but in a follow up email, Mercogliano denied that any NCAA rules had been violated. “There were no violations of NCAA rules to report,” he wrote.

On Monday, Libit published the meeting notes from January 17 in which athletic director Paul Krebs, UNM lawyers, and other school officials discussed ways to limit Libit or any other journalist’s access.

Beyond Krebs’ official dictums, he also also has been attempting to stanch the flow of information. Via NMFishbowl:

Athletic Department sources say that in recent weeks, Krebs has been adamant about department employees refraining from emailing certain kinds of information, for fear that it may materialize in a public records request.

Libit also writes that he filed numerous Inspection of Public Records Act (IPRA) requests, many of which have been soft-pedaled or refused outright.

The university, as a public institution, is subject to the New Mexico Inspection of Public Records Act, which requires the school to provide public records except in certain, limited circumstances.

This website has made dozens of IPRA requests, some of which have been denied, redacted or determined to be immaterial. Last year, the university instituted a new provision that stipulated a copying fee for records that exceed 20 pages.

Krebs declined to comment, but the lack of response to IPRA requests should be alarming to anyone who believes in the right to a free press.

“The First Amendment is meaningless without the ability to acquire the information from government institutions in the first place,” Peter St. Cyr, executive director for the New Mexico Foundation for Open Government, told Libit.

Libit has since alerted UNM that he plans to publish additional revelations from exit interviews in the weeks to come.