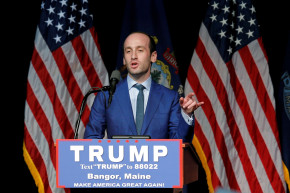 We've got everything here: race realism, gotta hear both sides, and even the REAL fascists

Stephen Miller, current Senior Advisor to President Trump and inaugural address co-author, first gained prominence thanks to some fire takes he wrote while still an undergrad at Duke University, a basketball college that no one likes. For two years, he had a bi-weekly column in the Duke Chronicle called “Miller Time,” (good name) where he railed, talk radio-style, against a sea of perceived liberal enemies and dire liberal offenses.

At Duke, he also met neo-Nazi and recent face-punchee, Richard Spencer. According to Mother Jones, the two worked together to bring one of the ‘intellectual’ pillars of the now-ascendant white nationalist movement, Peter Brimelow, to campus for a nice debate. (Miller denied having a “relationship” with Spencer, while Spencer said, “I knew him very well when I was at Duke.”)

In his columns, Miller fretted that Hollywood was destroying America because it dared to make movies about gay people and said interacting with any local Durham residents is a bad idea, because “Durham isn’t a petting zoo.” You get the idea. But what elevated Miller from your standard culture warrior, was his writing about the Duke Lacrosse case. Miller was still a junior when, on the night of March 13, 2006, an African-American woman, Crystal Mangum, who’d been hired to strip at a frat party, claimed that she had been raped by multiple members of the lacrosse team. The charges against the players were dropped a year later, but for Miller, there was one reason and one reason only for anyone to believe Mangum: reverse racism.

“Being a white, male lacrosse player was all it took,” he wrote in a column titled, “Prejudice.” Miller then argues there is no systemic racial bias at Duke. Rather, “In reality, the only widespread prejudice we have seen is the prejudice that has allowed a single unproven allegation to condemn and defame an entire community.”

Via Politico, some of his takes were so out there, even garden-variety Republican operatives and staffers were left slack-jawed:

Miller also seemed to come with a strange paper trail. “There were rumors that spread around that he wrote these columns at Duke that really walked a fine line on racial issues, to put it mildly,” the former staffer says. “I’ve stood in a lot of hallway huddles where the talk was, ‘My God, if you look at what he wrote in college…”

6. A portrait of radicalism

Miller has one salient point to make: Kyle Curtis, a Duke lacrosse player, received an F in a course from a professor who had praised campus protestors. He should have received a D, so he sued. In the resulting settlement, his transcript was changed to “passing.” Pivoting from there Miller then rattles off a litany of grievances against any Duke professor who clocks in somewhere to the left of Joe Liebermann.

…unless Duke ditches all the professors Stephen Miller doesn’t like.

4. The crawl of justice

Weeks before all charges were dropped, Miller demanded that disgraced and ultimately disbarred ADA Mike Nifong and Mangum herself be jailed. Those that fell somewhat short of criminal prosecution should be fired, like President Richard Broadhead and (again) every professor who in any way supported the protests or spoke an unkind word about the Duke lacrosse team.

It seems Stephen spent the summer plunked in front of the TV—and one cable news network in particular—to ensure that he had all the relevant facts down pat. His prescription for the student body? Encourage people to watch news shows like The O’Reilly Factor and the now-cancelled Hannity & Colmes, which offered an exceptionally fair and accurate view of the case.

Miller transcribes a lengthy conversation in which an unnamed fellow student called him a racist, (said student may have been the product of Miller’s imagination). In a brilliant rhetorical flourish, he tells her, “You’ve got a mental disease,” before pivoting to some ace concern-trolling.

We live in a society where a single accusation can lead to ruin. Indeed, we’ve seen on Duke’s own campus, with the lacrosse scandal, how truly dangerous an environment of racial paranoia is. When people adopt the outrageous assumption that conservatives, or wealthy white people or successful white people have it in for blacks and other minorities, and we let that assumption stand, we not only do a tremendous disservice to our society in general but also very particularly to these minorities themselves.

Of the three students accused by Mangum, one, who emailed a desire to flay the skin off of one of the strippers attending the party, had to have his name legally changed. The other two are currently employed.

1. Duke lacrosse: A call to action

This is just a banger of a lede: “There are few greater evils a person can suffer than to face trial for a heinous crime he did not commit.”

We can think of more than a few.

Miller does have one very strong take that we at False Start heartily support: smoking isn’t really that unhealthy and if you quit, you’re cowing to jackbooted “health fascists.”