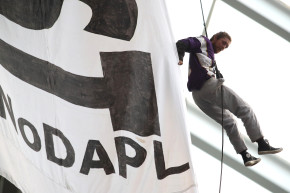 The #NODAPL Protesters Who Used The NFL’s Stage

On January 1, during the regular season finale between the Minnesota Vikings and the Chicago Bears, a pair of climbers, Karl Zimmerman and Sen Holiday, went over a guardrail at US Bank Stadium and ascended to the rafters. Once there, they unfurled a large banner reading “DIVEST,” aimed at the stadium’s sponsor, US Bank.

Zimmerman and Holiday’s action was part of a larger struggle against the Dakota Access Pipeline, which has seen thousands of protesters flock to Standing Rock to help the Sioux defend both their sacred land and the reservation’s primary source of water. Although the climbers were eventually arrested, they were up in the rafters for over two hours before descending, as their message was broadcast not only to the tens of thousands in the stadium, but also to the hundreds of thousands more watching the game at home.

An NFL game may not seem connected to the Standing Rock struggle, but US Bank, the sponsors of Minneapolis’s brand new $975 million stadium, are also extending a $175 million credit loan to Energy Transfer Partners, the parent company constructing the Dakota Access Pipeline, which threatens the water source at the Standing Rock Sioux reservation. The threat has only grown more dire in recent days, as President Trump signed an executive order Tuesday to streamline approval of the pipeline, in opposition to President Obama’s rulings dating back to November 2015.

“US Bank Stadium is a publicly funded stadium and US Bank is invested in the pipeline,” Karl Zimmerman, 32, one of the two climbers on January 1, told me over the phone. “The public deserves to know where that money is going.”

Zimmerman and Holiday’s action served as a cap to a month of activism for Standing Rock called “Action for December.” “This comes as a sort of finale for all that,” Zimmerman said. “It also was good timing in that it’s the New Year and it’s giving hope for another way. We heard a lot of responses from people on social media and people we talked to like, ‘What a great way to start the new year,’ because people are feeling, in the current climate, down about a lot of things.”

Few—if any—of those actions had the sheer reach of Zimmerman and Holiday’s climb. “It was a safe way to get the message out to many, many people,” Zimmerman said. The game was attended by 66,872 people and viewed by many more watching at home, not to mention the widespread coverage the action garnered as the media reacted to the ongoing protest.

“We were looking for the crowd to have a response and to spread the message. We were really happy with how it spread on social media,” Zimmerman said. “We’ve heard lots of stories of people closing their accounts with US Bank and taking their money to credit unions instead. And we’ve heard a lot of people saying they were inspired and uplifted by the action, and inspired to take action themselves.”

Some boos were audible over the TV microphones, but Zimmerman said reception in the stadium was largely positive. “When the Bears scored, I heard booing, but other than that we heard lots of cheering. When we were dabbing and stuff and rappelling down, people were excited about that. I also heard reactions from a lot of people that there was sort of a delayed response. When the banner came down, people were saying it looked so official that they thought, oh, this is part of the stadium or part of the game. They weren’t sure what it was. It wasn’t until people started looking up the hashtag—you know, #NoDAPL—until they realized what was going on.”

More importantly, Zimmerman said he has heard of many people who have closed their accounts with US Bank since the protest. “You know, there were two meanings to the banner,” which read simply “Divest,” Zimmerman said. “It’s mainly targeted at US Bank to pull their money, their loans from Energy Transfer Partners, the parent company of the Dakota Access Pipeline. But it’s also aimed at people who have their money in US Bank. So if US Bank doesn’t respond and if they don’t act ethically and hold themselves to their own business partner, we’re also talking to the public to pull their money out of US Bank.”

US Bank for its part, according to Zimmerman, has not made any response to their demands for divestment and is “still invested in this unethical and destructive pipeline.”

Despite the outpouring of support the protesters’ experience via social media and in person, there was still a vocal minority deploring their actions. Many sports fans still respond negatively towards any attempt to bring social issues into the arena. ESPN ombudsman Robert Lipsyte wrote in 2014 of responses from viewers about the network’s attempts at journalism, “The most frequent message I received had to do with ESPN betraying its presumed role as an escapist sanctuary. The correspondents invariably complained about a ‘societal issue’ such as ‘homosexuality’ becoming a continuing storyline on ‘SportsCenter’ and thus invading the living room during family time.”

I asked Zimmerman about his response to the accusation that actions like his are imposing on what some fans consider to be a safe space. “As a sports fan myself,” Zimmerman responded, “I think that US Bank has politicized the game by using a publicly funded stadium to advertise themselves while they fund these dangerous and unsafe and unethical projects and business practices like the pipeline.

“For me, every time I look at that stadium, it brings up bad feelings for myself when I see the US Bank logo on there,” Zimmerman continued. “I think that people deserve to have their space respected — especially the people at Standing Rock. The native people who are affected by this pipeline, who are having sacred sites bulldozed and having their land taken away, the health of their water threatened, and treaties not recognized. As a sports fans, I want to know that this is happening. We think other people do too.”

Although the Army Corps of Engineers blocked the pipeline’s passage through Standing Rock in December, the fight isn’t over. The fines the government will levy on Energy Transfer Partners for drilling despite the Army Corps’ order are too little to prevent the operation. Zimmerman suggested there are two ways to truly end the fight. “Either investments — the banks that are invested in the pipeline — pull out, which some have. Or, the government steps in and actually bans the drilling under the river and honors the treaties that the Standing Rock tribe made a long time ago.”

Zimmerman and Holiday were both arrested for trespassing, and a third person, Carolyn Feldman, was arrested for obstructing the legal process. No charges were filed, but Zimmerman said, “We expect that charges will come soon, and we’re prepared for that. We are accepting donations for a legal defense fund.”

In the meantime, the fight continues. ” The Standing Rock Sioux still need our support. We encourage people to take action and get involved. They can visit our website or organize actions of their own. They can encourage friends and family to pull their money out of their US Bank accounts. They can spread the word on social media,” through Twitter hashtags like #NoDAPL. With President Trump in office and already working to advance the pipeline despite the potential ecological disaster and the violations of treaties with the Standing Rock Sioux, the fight may be just beginning. Actions from common people — whether direct action or simply moving their money away from the corporate bodies responsible for the pipeline’s construction — will become more important than ever.

I asked Zimmerman if he thought sporting events offered promise as a future staging area for protests, whether for the movement against the Dakota Access Pipeline or other causes. “I don’t know about that,” he said, “but I do know for us, we’ve gotten a lot of positive response, so much. And lots of positive coverage. That includes positive response from many many people before the game. If you look up the hashtag #NoDAPL, you’ll see some photos from reporters but many, many photos from people at the game really excited for the action and with a lot of hope for the new year that the Standing Rock tribe will win. And all of this was done without interrupting the game.”

Zimmerman was there for Standing Rock, but his inner Vikings fan took delight at the events of January 1st as well, a 38-10 domination of the rival Chicago Bears. “We were excited that the day we chose to do this action the Vikings actually won and crushed the Bears, Zimmerman said, closing with, simply, “Go Vikes!”

Sports and protest may be uncommon partners, but the action carried out by Zimmerman and Holiday shows just how powerful sports can be in helping to advance a cause. With nothing more than some nylon ropes, carabiners, and a banner, the climbers helped the #NoDAPL message reach hundreds of thousands of people. Sports in America, particularly football, reach broad swaths of the general population in a way few cultural avenues can match. As Zimmerman and Holiday showed on January 1, that reach can do wonders in advancing a valuable cause like the one against the Dakota Access Pipeline. It will be well worth watching if others follow their example in the future.