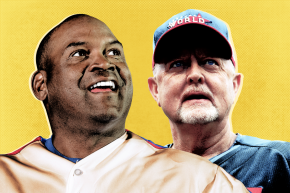 The Internet Has Changed Baseball Hall Of Fame Voting Forever

The thick black locks from Tim Raines’ playing days have receded. The facial hair he often sported now comes in so white that his children call him “Santa.” His frame is no longer as muscular and compact as when he featured what one observer dubbed “Mach One” speed. Indeed, he hasn’t played a big league game in 15 years, yet his baseball career has continued to evolve.

Raines was one of the headlining guests at a gala thrown by the Montreal Baseball Project two years ago, an event hoping to generate the enthusiasm needed to resuscitate the sport in the Quebecois city. The outfielder, who played his first dozen seasons with the Expos, had languished on the Hall of Fame ballot for the better part of a decade by then, years in which every detail and number of his career had been pored over to determine whether his 23 years in a big league uniform had Cooperstown merit.

By then, Raines thought he knew himself — that is, until baseball writer and Montreal native Jonah Keri preceded him to the podium.

Keri, well versed in advanced metrics with early bylines at the quantitative-leaning Baseball Prospectus, offered a new perspective on Raines’ career. Rather than focus on how his 2,605 hits were shy of the common Hall benchmark of 3,000, Keri noted that Raines reached base via hits and walks nearly 4,000 times — more than Tony Gwynn, Mike Schmidt, Roberto Clemente, and other Cooperstown luminaries. Raines is one of only five players with at least 800 stolen bases but, importantly, his success rate is first among all 63 players in history with at least 350. Keri had written columns to this effect, not to mention a standalone sidebar in his bestselling Expos book, but this reached Raines on a whole new level.

“That was the flash point: ‘Oh wait, there’s a guy actively stumping for me for some reason,’” Keri said.

Raines had debuted on the Hall ballot in 2008 but received only 24.3 percent of the vote — a third of the 75 percent needed for enshrinement — and actually dipped to 22.6 percent in his second year of eligibility. From there, however, he started gaining votes in drips and drabs until garnering a whopping 86 percent of votes this month and earning a ticket to his Cooperstown induction ceremony in July.

“Sabermetrics played a really big role, I think, in giving me the opportunity to be here,” Raines said, referring to the new body of statistical knowledge.

While Raines’ own merits are, of course, the reason why he got elected, having an Internet-savvy advocate distill the context and importance of his achievements helped immeasurably.

Raines became a cause célèbre among quant writers and those mostly younger reporters receptive to these metrics, and a groundswell of support bubbled up on Twitter and in the stat-minded blogosphere. In recent years, Keri has had an enviable platform to broadcast his message, on sites such as ESPN’s Grantland and now CBSSports.com.

The new wave of statistical analysis alone wasn’t enough to triple Raines’ vote total from the electorate in the Baseball Writers Association of America. Netting three-quarters of the vote requires reaching an older cohort of writers, too, and BBWAA rules require members to serve at least 10 consecutive years before gaining Hall enfranchisement.

One key change: The Hall and BBWAA revamped the voting policy, purging some 130 of the oldest voters — those no longer actively covering the sport — thereby shifting the demographics younger. For the older reporters who remained voters, the newer statistics that Keri and other quant journalists rely on didn’t exist during their formative years on the beat. Thus, these metrics have remained inaccessible for some writers — and for the majority of players, whose currency was hits and RBIs, not on-base percentage and Wins Above Replacement.

“Instinctively, [Raines] might have known it as a player, but he had never heard from the media or maybe not even from teammates just exactly how important being — what? — the second-best leadoff hitter since World War II, arguably, is,” Keri said.

Though Raines thanked Keri by name in his conference call with writers after his election, Keri is quick to downplay his part. (Keri, it should be noted, is a BBWAA member but is years away from a Hall vote.)

“I think the biggest reason Raines got in is the voter rolls changed,” Keri said, adding: “That makes a difference because those [younger] people are more analytical, more progressive, what-have-you.”

But someone still needed to reach the audience of older, tenured writers eligible to vote. Keri became that messenger or, as he’s been called across the Web, a “Tim Raines evangelist” and “unofficial campaign manager.” His writing and social media posts became so ubiquitous that a top Google search completion for “Tim Raines” is the name “Jonah Keri.” (At least on my device, “jonah keri” was the fourth suggested fill-in.)

Keri also took the unusual step of directly emailing a number of voters. Ryan Thibodaux, a healthcare professional and baseball enthusiast, has tracked Hall of Fame ballots for the last five years and become and indispensable industry resource for those closely following vote totals. Thibodaux compiled a list of voters whom he thought “might have a better than average chance of voting for Raines” based on their track record and shared that list with Keri, saying, “Do with this as you wish.”

That list in hand, Keri pasted his open letter column supporting Raines and directly delivered the message to voters’ inboxes, rationalizing it as “a friendly and polite one email.” A couple writers were irked by the intrusion but, at least publicly, far more were receptive and even swayed. One voter referred to the “extremely informative email from Jonah Keri” in explaining his Raines vote, and others also cited it as part of their reasoning. Some established writers, such as Fan Rag’s Jon Heyman, previously wrote that Keri changed his mind on Raines based on prior writings, saying, “I give Jonah Keri credit for carrying the torch. He is right.”

Keri’s predecessor in this field was a Long Beach, Calif., investment manager, Angels fan, and ardent Bert Blyleven backer named Rich Lederer. He moonlighted as a baseball blogger, and his site, BaseballAnalysts.com, eventually tallied 33 stories in its Bert Blyleven Series. In 2005, he wrote, “I’m going to be candid about the motive behind this special feature right from the outset. The purpose is none other than to raise the awareness of Blyleven’s qualifications for the Hall of Fame prior to the time when most of the voting members of the Baseball Writers Association of America cast their ballots.”

At the time of that post, Blyleven had topped out at 40.9 percent in eight years on the ballot. He’d crack 60 percent three years later and reach the Hall three years after that. The help didn’t go unnoticed.

“There have been a lot of people in my corner, and that’s the most positive thing that I have witnessed and been a part of it for the past 13 years,” Blyleven told me in 2010, the year before his eventual election. “Guys like Rich Lederer of baseballanalysts.com, all the articles he’s written have helped me, taking a deeper look into my numbers.”

Lederer has said previously that his efforts — like Keri’s stumping work for Raines — began without the sanction or knowledge of the candidate, “It’s just something I got behind, because I felt he was very deserving.” His father had been a Dodgers beat writer, so such work felt natural.

Keri knows Lederer a little — they once attended an Angels game with a mutual friend — but shies away from too much of a comparison.

“I was aware of Rich’s efforts,” Keri said, “but I think it was more organic than that because I just came into it and sort of looked around the landscape: How can this be? How can I feel so confident about this thing and literally three-quarters of the electorate were like, ‘We don’t care.’”

Other players, such as fellow 2017 elected Jeff Bagwell, have taken notice of the underground effort.

“For somebody to do that, I applaud him for that,” Bagwell told the St. Louis Post-Dispatch of Keri. “Sometimes some people need some extra knowledge of what he meant to game. His numbers speak for themselves. It’s ridiculous how long it’s taken for him to get into the Hall, 10 years.”

And some writers are, at least in jest, already planning to pick up the mantle for their favored candidates who’ll hit the ballot in the years to come.

Omar Vizquel is a Hall of Famer. The drum beating starts now. If I have to be his @jonahkeri, so be it! https://t.co/aOSlCw5Kk6

Though retired players obviously aren’t accruing any more stats while sitting idle on the Hall ballot, the march of time brings in the fresh perspective of new voters and lets retired players’ accomplishments marinate with older voters, who sometimes change their minds. That’s especially true now, in this new age of accountability. Starting next year, every Hall ballot will be made public, which might compound the effect the Hall Tracker has already had.

“If my ballot tracker does anything, I think it might allow voters to re-evaluate their positions on various players,” Thibodaux wrote to Vocativ. “If a voter sees that a large number of voters are supporting the candidacy of a player he or she doesn’t support, it may give that voter reason to reexamine the player more closely.”

That can take time, not that those who ultimately benefit will mind in the end.

“It took a while,” Raines said, “but I’m so excited right now that I can’t even remember that it took 10 years.”

Keri, meanwhile, has gotten to know his childhood hero through these campaign efforts and will be traveling to upstate New York for the late July induction ceremony. His reward for this labor of love? Joy.