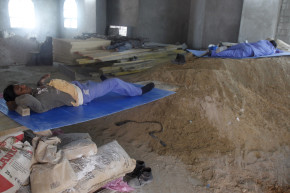 The migrant workers building 2022 World Cup venues will still be exploited, same as before

Qatar enacted years-in-the-making legislation last month that formally abolishes its kafala system of indentured servitude, which is responsible for human rights abuses and modern slavery of migrant workers, many of whom have reportedly died while working in abhorrent conditions for sub-par pay and needing their employers’ permission to change jobs or leave the country.

Much of this abuse has come to light thanks to reports from groups such as Amnesty International and others who have investigated the practices during the mass construction of stadiums in advance of the 2022 World Cup. Critics panned the new law at the time as insufficient reform.

Now, some two weeks later, Qatar is reportedly backtracking from the newly revamped system via the Emir-issued Law No. 1 of 2017 that still requires expatriate workers to seek permission from their employers to leave the country. As Migrant-Rights.org explained, what was going to be an automated system has been scrapped in favor of the prior system by which employers must grant permission.

As Human Rights Watch wrote, “Changes to the labour law that took effect in 2016 will not protect migrant workers from the serious abuses that characterize Qatar’s construction industry and other low-paid sectors of its economy… Migrant workers will not be able to switch employers, even if the workers experience abuse, and will still need their employer’s permission to leave the country.”

Furthermore, argued James Dorsey, an international studies scholar and author of The Turbulent World of Middle East Soccer, the lack of meaningful change in labor law, combined with a multi-billion-dollar investment in Russian state oil company Rosneft PJSC, demonstrate that “countries like Qatar, which has been under pressure to clean up its human rights act in the wake of winning hosting rights for the 2022 World Cup, no longer feel the need to at least pay lip service to human rights and trade union activists clamouring for an end to kafala, the labour sponsorship system that puts employees at the mercy of their employers.”

Soon after the softened employment law came international legal corroboration, with the Commercial Court of Zurich rejecting a lawsuit filed by Dutch and Bangladeshi trade groups against FIFA for alleged human rights violations pertaining to Qatari World Cup construction. FIFA crowed about the ruling, issuing a statement that said it “welcomes the decision” while touting their so-called record on the matter.

“FIFA takes the issue of working conditions and human rights in connection with the 2022 FIFA World Cup in Qatar very seriously,” soccer’s international governing body wrote. “FIFA monitors the situation very closely and, as recently stated by President Infantino, will continue to urge the Qatari authorities to ensure safe and decent working conditions for construction workers.”

Well, FIFA did post a story on its website about the solar-powered, cooling construction helmets that might be available to some workers, complete with pull quote boasting that “this innovative technology will provide a more comfortable and safer working conditions for the workers.”

Then why are human rights groups still up in arms?

“Qatar’s refusal to countenance meaningful reform of its labor system will mean more abuse, more exploitation, and more suffering for migrant workers,” Joe Stork, deputy Middle East director at Human Rights Watch, said. “Qatar claims to have abolished its kafala system, but all it did was change the name.”