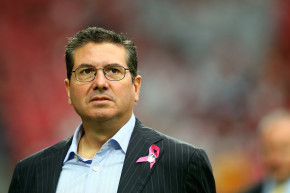 A case involving an Asian-American band called The Slants just might decide the future of the Redskins' franchise name, seriously

You may not have heard of The Slants, an Asian-American Portland rock band, but the Washington Redskins are banking that their ongoing battle to attain trademark protections will bolster its own First Amendment case. In 2014, the U.S. Patent and Trademark Office canceled six of Washington’s trademarked images and logos, ruling that they were “disparaging to Native Americans at the respective times they were registered.” That decision was upheld by the United States District Court in Virginia, though the team has maintained trademark rights throughout the ongoing appeals process.

To date, the Supreme Court has declined to hear the team’s appeal, but on Wednesday, oral arguments will begin in Lee v. Tam. In 2010, lead singer Simon Tam’s application to trademark the band’s name was rejected by the Patent and Trademark Office on the grounds that the word “slant” violated Section 2(a) of the Lanham Act, which prohibits the Federal government from authorizing trademark protections for “matter which may disparage … persons, living or dead, institutions, beliefs, or national symbols, or bring them into contempt, or disrepute.” The PTO also invoked the disparagement clause to justify revoking the Redskins’ trademarks. The Court of Appeals for the Federal Circuit ruled in Tam’s favor in December 2015, rendering the disparagement clause unconstitutional.

“It is a bedrock principle underlying the First Amendment that the government may not penalize private speech merely because it disapproves of the message it conveys,” Judge Kimbery Moore wrote in the majority opinion.

There’s no denying that “slant” can and has been used as a racial slur, but as Tam and his lawyers have argued, their intent was always to reclaim and re-appropriate the word, and is in no way intended nor should it be plausibly read as derogatory or disparaging.

The United States government, however, claims that trademark protections do not represent an infringement on Tam’s right to free expression. Rather, granting a trademark confers a specific financial benefit, and therefore the PTO has both a vested interest and the right to make a determination on which imagery and languaged deserves to protected, backed by the full weight of the Federal government. In brief, “government speech” is of a different order than free speech.

As both Tam and the Redskins have argued, over the years the PTO’s determination of what is and is not derogatory has been less than consistent. Since we’ve been delving into a nuanced and complex legal argument, here’s a fun list of companies that can slap an ® after their name.

Via the Redskins’ 82-page appeal:

Regardless of however the court rules, it’s worth noting that there’s a world of difference between The Slants’ activism and the word “redskin.” Despite the team’s and Commissioner Roger Goodell’s groaning insistence that it’s some kind of attempt to honor Native Americans, it is a slur. While we’re here, please don’t point to (problematic) polls which allege that Native Americans don’t care about the issue. And if the court decides that the government shouldn’t be in the business of sifting through nuance and intent vis-à-vis copyrighted language, thus granting the Redskins the right to churn out mugs and jerseys forevermore, please don’t assume Tam sees owner Dan Snyder as a heroic defender of free expression. As he told the Washington Post, “I don’t want to be associated with Dan Snyder.”