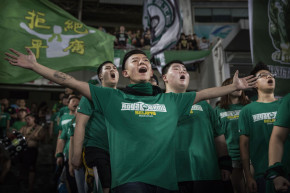 The Chinese Super League has been snatching up top flight talent at a shocking rate, but changes are a coming

As part of President Xi Jinping’s ambitious plan to transform China into a soccer powerhouse, Chinese Super League teams have been signing big name soccer stars to absurd contracts. In December, Shanghai SIPG acquired Oscar from Chelsea, paying a reported $74 million dollars in transfer fees. Not to be outdone, their rivals, Shanghai Shenhua, spent $11 million in transfer fees and handed a two-year, $40 million dollar contract to Carlos Tevez. Those two joined fellow Super League signings Alex Teixeira, Graziano Pellè, Jackson Martinez, Ezequiel Lavezzi, and Hulk as some of the highest-paid players in the world; a stunning turn of events for a 13-year-old league that no one imagined would ever compete with the world’s top leagues for talent.

However, on Monday, the Chinese Football Association announced a series of rule changes aimed at stemming the tide of what it deemed an “irrational” splurge. The Association reduced the number of foreign players that can take the field from five to three and now requires that one starting 11 spot be reserved for a Chinese-born player younger than 23 years old, with more yet-unnamed plans to monitor spending and cultivate stable, sustainable growth supposedly on the way.

“Clubs – based on their geographical background – will have to develop a diverse shareholder structure and have a neutral club name; regulate their own financial systems; allow third party audits; form a standard financial protocol; form a healthy and independent operating system and develop self-regulation and management quality,” the CFA said in a statement, which seems to heavily imply that clubs are handing out massive contracts without the internal safeguards to do so in a financially responsible manner.

This comes on the heels of a recent editorial in The People’s Daily, a state-run publication of the Chinese Communist Party, which railed against the current “arms race” and fretted that the hundreds of million spent in 2016 alone was indicative of a “bubble” that would eventually burst.

“Moderate introduction of foreign players … is good,” said the editorial, “moderately increasing investment to enhance the club’s image and the football market is good.” But the ‘crazy’ spending will lead people to ask “is this to deliberately hype themselves or to genuinely develop football?”

If clubs “only know how to spend money and not make it … relying on this ‘burning money’ mode to maintain operations, how can they become a ‘hundred years’ club?”

Coming off a year that saw the Super League upend the norms of the soccer economy by handing out Godfather offers to anyone willing to haul off for China, this sudden turn towards mandated fiscal responsibility now seems inevitable. Initially, it seemed that the Super League’s path to solvency would be aided by the largesse of multinational corporations buying up club stakes as well as a five-year TV deal worth $1.25 billion in a market that doesn’t have direct competition from the European leagues for ratings. Given China’s population of 1.35 billion and a state-mandated effort to make China into a legitimate soccer country, even a skeptical observer could see how the pieces were lining up to make China’s audacious plan a success.

Whether or not the CFA’s changes are merely an attempt to keep the Super League’s focus on cultivating Chinese talent or a sign that there is more to the league’s long-term health than has been assumed remains to be seen.