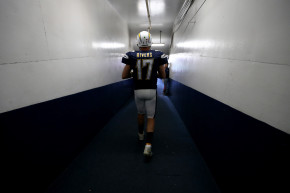 Dramatic representation of the Chargers' departure — Getty Images
By Joe Lemire
Jan 17, 2017 at 10:38 AM ET

The indelible image of the NFL’s Colts moving from Baltimore to Indianapolis back in 1984 is that of a Mayflower moving truck pulling into the franchise’s suburban headquarters for the secret, middle-of-the-night relocation.

The next-door neighbor to Indianapolis’ mayor happened to be a man named Johnny B. Smith, chairman of Mayflower, and he offered to do the move pro bono. His trucks and company have become inextricably intertwined with the lore of the stealth move; profane t-shirts spotted in Maryland target Mayflower as well as the Colts.

The Chargers’ impending address change from San Diego to Los Angeles before next season won’t be such a furtive endeavor, but dozens of moving companies have announced plans to refuse the franchise’s business. The effort was the brainchild of www.HireAHelper.com, a San Diego-based national corporation, which has rallied a couple dozen of their competitors. The running tally of volunteers is now at 24, as of Tuesday morning, and can be found on their website, WeWontMoveYouChargers.com.

“We were just sitting there thinking about the physical move of the Chargers,” Ryan Charles, sales and marketing head for www.HireAHelper.com, told NBC’s San Diego affiliate. “We were thinking we would not want to be a part of that, having been born and raised here and being a lifelong Chargers fan.

“Other moving companies, our peers, might not want to, either,” Charles added, “and wouldn’t it be cool if we all banded together to say that we wouldn’t? The feedback was immediately positive. I got chuckles, people were laughing, there were guys saying ‘I wouldn’t move them for X amount of dollars.’”

This is no small matter, either, as such a job would easily reach an estimated six-figure contract but, as the site says, they “don’t want to see our 56 years of San Diego Chargers history be pulled out from under us.” (They note an exception for the team owner, however: “we’re totally fine moving [Dean] Spanos out of San Diego.”

Oh, and Los Angeles doesn’t want the Chargers, either. The site adds a postscript that says, “L.A. movers won’t move you either. Sorry.” At last count, eight of that city’s companies were boycotting, too, echoing the reaction of Los Angeles Clippers’ fans resounding boos at seeing the logo displayed over the weekend.

They just showed the new #Chargers logo and their tight end at the #Clippers/#Lakers game. Nothing but "boos!" Welcome to LA. pic.twitter.com/DhhlVvI9Ec

It’s almost like the Chargers should have stayed loyal to their fan base.