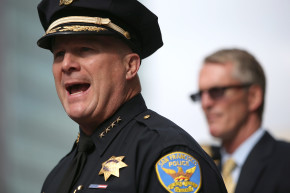 Surely no one could have predicted this

Meet Greg Suhr, the former San Francisco chief of police. He was named to the post in 2011 and served for five years, a tenure marked by allegations of policy brutality, racial profiling, and the revelation of a “substantial number of racist and homophobic text messages” sent by multiple officers like, “I hate that beaner, “but I think the nig is worse.” After a series of police shootings, including that of an African-American woman who was unarmed and trapped in a crashed and allegedly stolen car, Suhr tendered his resignation in May at the request of Mayor Ed Lee.

On Thursday, the Golden State Warriors, who either failed to read the fine print on his resumé or just didn’t care, hired him as the team’s new security consultant. Tell us why Suhr is so imminently qualified for the position, Warriors.

“Chief Suhr is an expert on public safety, security issues, event planning and operations, VIP protection, risk assessment and other matters related to the safe and secure operation of a major public venue,” the team said in a statement. “The organization is happy to have him on board.”

That happy honeymoon lasted all of a few hours as news of Suhr’s hiring sparked an inevitable and just backlash. Both sides soon came to the realization that this was a terrible idea.

Official statement from the Warriors re: Greg Suhr's Consulting with the team pic.twitter.com/FGBEr9LglH

Why the Warriors thought that locals in particular would have forgotten Suhr’s scandal-ridden reign after a matter of months remains unknown.

“I don’t want to throw the Warriors under the bus,” Sellassie Blackwell, an activist who’d previously engaged in a 17-day hunger strike in an attempt to force Suhr to resign, told the San Francisco Chronicle. “But I think everyone in the Bay Area knows who Greg Suhr is. It rings a bell in everyone’s mind. Why would the Warriors hire him with his spotty record as a police chief?”

Before the Warriors and Suhr announced that they were parting ways, forward Andre Iguodala, who’s spoken about the need to hold law enforcement “accountable,” wrote this somewhat cryptic tweet.

When asked by the San Francisco Chronicle if Iguodala or anyone else on the roster had influenced the team’s decision to reverse course, the Warriors declined to comment.