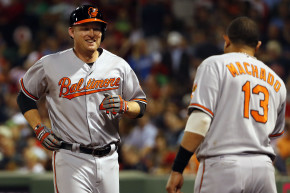 The Texas Rangers Want All The Players
By Joe Lemire

The Texas Rangers Want All The Players

NOTE: This story has been updated with a comment from Rangers general manager Jon Daniels.

Wednesday’s report, from Fan Rag’s Jon Heyman, that the Texas Rangers had decided to “check in” on slugger Mark Trumbo seems innocuous enough. It was not even the first time the link has been made.

But detach yourself from the daily and hourly grind of Hot Stove reporting and look globally at the full compendium of winter rumors, and a pattern emerges. The Rangers are adding all the players. No, really. They have been linked to essentially every notable free agent and trade target.

Though all Texas has actually done is re-sign outfielder Carlos Gomez and add free agent pitcher Andrew Cashner on one-year deals—not to mention an assortment of low-profile waiver claims and veteran minor league signings like outfielder Travis Snider and infielder Will Middlebrooks—anyone reading tweets, blogs, and newspapers would think the Rangers are intent on world domination.

The Edwin Encarnacion-to-the-Rangers talk was abundant all winter—right up until the first baseman signed with Cleveland—with such speculation that Texas was “in the mix” and “an interesting match” for him in early December.

Fellow power-hitting first baseman Mike Napoli and the Rangers recently were said to be “highly motivated” to get a deal done. Back in November, another big righty bat, Jose Bautista, was reported to be “on the radar” for Texas.

The chatter hasn’t been limited to first basemen either. Texas was “lurking” on Carlos Beltran, having “intensified” discussions with Ian Desmond, “heavily pursuing” pitcher Rich Hill, “being aggressive” to add pitcher Tyson Ross, “had interest” in starter Edison Volquez, and is “considering” right-hander Jason Hammel.

If there’s been a desirable talent on the trading block, don’t worry, the Rangers have been kicking the proverbial tires there, too. Regarding former White Sox ace Chris Sale, the Rangers were among five teams “starting to separate themselves at the forefront of talks.” The club was in “frequent contact” with the Pirates about their former MVP centerfielder Andrew McCutchen. Texas had “spoken” to both the Royals about its All-Star Lorenzo Cain and the Rockies about their collection of outfielders.

The Rangers “discussed” righty Alex Cobb with the Rays, “inquired” about White Sox lefty Jose Quintana, were “interested” in former Cubs outfielder Jorge Soler, were “taking a look” at Reds speedster Billy Hamilton, “checked” in on the Padres’ Travis Jankowski and the Braves’ Ender Inciarte, were “talking about” Tigers lefty reliever Justin Wilson, “have talked to” the Reds about their starting pitchers.

Clearly, it’s become formulaic this winter to add the Rangers as a fill-in-the-blank suitor of every player that might be available, wither reporters practically filling news cycles with automated rumors—like the Bot Stove come to life.

Why Texas? There are several reasons why they’re a plausible destination for any number of players, presumably leading to a lot of agents and opposing executives to plant leaked rumors about the Rangers’ interest to create negotiating leverage.

1. The Rangers are a contender looking to get past the playoffs’ first round.
2. Division rival Houston has already made a bevy of moves to improve.
3. Texas has money—a $3 billion television deal and, more recently, the contract of retired first baseman Prince Fielder coming off the books.

“We’ve got a good team, a history of adding to it and recently adding guys later in the winter, and the perception we’ve got a number of openings at positions the market still has a lot to choose from,” general manager Jon Daniels wrote in an email to Vocativ. “We’re open to the right addition, but also comfortable with the younger guys we’ve got in house and could elect to go that way too.

“The rumors are going to be part of it until we either make another acquisition or commit we won’t—we’re not ready to do either just yet.”

There may also be a modicum of truth to this dizzying array of reports: Daniels and his front office team is probably just thorough in making sure no stone goes unturned.

Or maybe the Rangers really will corner the market on every available major league talent, forcing their competitors to patch together lineups with minor league farmhands. Everything, after all, is bigger in Texas—even, apparently, rosters.