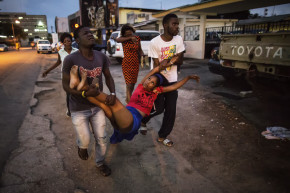 The Africa Cup Of Nations Flirts With Disaster, Again
By Joe Lemire

The Africa Cup Of Nations Flirts With Disaster, Again

The African continent’s biennial soccer tournament, the Cup of Nations, kicks off in Gabon this weekend amidst social, political, and economic trouble. Reporters have described the mood as “gloomy and tense” or having an “air of unease.”

The tiny coastal nation in Central Africa is abundant with oil but reeling from plummeting oil prices. Gabon’s president, Ali Bongo Ondimba, continued his family’s half-century of governance with re-election in August—but in a tightly contested election separated by a few thousand votes among the 1.8-million populace, although the European Union said the electoral proceedings “lacked transparency.” Further, it’s widely understood that Ali’s father, Omar, used the nation’s oil wealth to enrich himself during a 42 year long reign as Gabon’s president, which also saw him all but eliminate any sort of viable political opposition.

So much so that the opposition candidate, Jean Ping, has not conceded, touting himself as the true victor in light of the aforementioned concerns about election transparency; Ping wrote an op-ed in the New York Times pleading for help from the American people. There are reports that some 100 people died in post-election riots as well as more than 1,000 arrests taking place.

Now, this country beset with turmoil—oh, and with other issues such as two maybe-kinda-sorta-barely-finished new stadiums as venues—is about to host a major continental soccer showcase with elite talent, including scores of Premier League players. As recently as October, the Guardian said no one was confident the Cup would even take place in Gabon.

The Agence France-Presse reports that local opposition newspapers are calling for a boycott of the Cup of Nations; the Associated Press wrote that some want to use the platform “to express their grievances” with the president. This actually is better than the alternative: the tournament had been slated to be held in Libya, before its roiling war led to a relocation.

Problems have arisen in other countries, too. As the AP wrote about the 2015 draw:

But the African championship is also an event that flirts with calamity. Two years ago at the tournament in nearby Equatorial Guinea, there were brawls between players on the field and riots in the stands when security forces waded in among supporters wielding batons and an army helicopter hovered so dangerously low in the stadium that its rotors whipped up debris and scattered the spectators.

Bongo has promised to renew political discourse “the day after the 2017 Africa Cup of Nations ends,” the AFP noted, but that’s a month away—and a lot of football to be played between now and then.