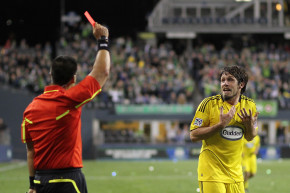 The St. Louis MLS Stadium Scam Is Dead, As It Should Be
By Robert Silverman

The St. Louis MLS Stadium Scam Is Dead, As It Should Be

A bunch of rich dudes tried to fleece St. Louis out of $129 million for a soccer stadium and, for once, the rich dudes failed

It’s doesn’t occur that often, but sometimes, politicians stand up to greedbag owners who show up hat in hand. Take the state of Missouri and SC STL, a consortium of very wealthy dudes who really want a very expensive arena to house their expansion Major League Soccer team. As is always the case, they’re not too keen on paying for said stadium, so they’ve asked the city and state for a combined $129 million dollars in state tax credits, improvements to the land surrounding the stadium, the money to buy the land itself, and… well, a pile of free money, just because.

Of that total, $80 million would have been generated by an income tax increase, but now, the measure won’t even be put up for a vote.

Via the St. Louis Post-Dispatch:

“That bill will not be moving forward,” Alderman Christine Ingrassia, 6th Ward, said at Tuesday’s meeting of the aldermanic Ways & Means Committee.

Whether that kills the city’s dreams of an MLS franchise is yet to be determined, but the odds against are stacked.

Ingrassia’s proposal had received a serious boost from outgoing Mayor Francis Slay, who backed SC STL’s proposals to the hilt. But once newly-elected Governor Eric Greitens rightly called any state funding “welfare for millionaires” and insisted he’d do everything in his power to staunch the gravy train, Ingrassia had a serious change of opinion. Now, the costs were prohibitive. (This is for a funding bill she put forth, mind you, and should in no way be seen as an attempt to curry favor with Governor Greitens.)

Ingrassia said she wanted SC STL to show a proposal that was at least “revenue neutral” on the city’s budget over time.

“It looked like to me, and in the conversations I had with people who have more expertise in the field of public financing, that they were basically just repackaging the same subsidies in different ways,” Ingrassia said. “So they were asking for way more than I feel like we could support here in the city.”

There’s a miniscule chance the measure could still be put forth for a vote on April 4, but with two weeks remaining until the deadline and little chance the political winds will pull a 180, as the St. Louis Dispatch wrote, the “bill is effectively dead.”

SC STL remains hopeful that some funding can still be scraped together, and they seem willing to downsize their stadium plans if all else fails. But there’s zero need to follow the advice offered by one St. Louis Post-Dispatch columnist in the wake of Tuesday’s announcement: the soccer community should “step up” and pre-buy a bunch of season tickets just to show SC STL how much they really, really love soccer and want a team to call their own.

Dear Lord, no. Do not give these people any money, especially since they certainly can afford to pay more than 34 percent of the estimated total stadium costs, even as a token gesture. Missourians, for once, your politicians are acting in your best interests. Don’t make their job any harder than it needs to be.

Here is a campaign ad from Governor Greitens, a decorated Navy Seal, in which he fires a Gatling gun in slow motion. He was not taking aim at a failed stadium grift when he filmed this bit of agitprop, but it’s a nice metaphor (weird firearms fetish notwithstanding) so let’s roll with it.