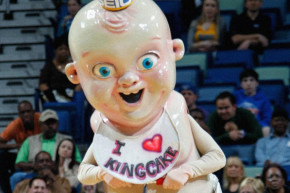 Reminder: Brands are not your friend

The New Orleans Pelicans’ mascot, King Cake Baby, has earned a measure of viral fame beyond what you’d expect from a standard-brand sports mascot, aided in no small part by videos of the giant, monstrous creature that have been giddily passed around on social media.

When KCB shows up at your house in an @Uber_NOLA with a special delivery! #PelicansKCB pic.twitter.com/yCeJBUxn17

Rather than try to buck the tide and posit King Cake Baby as some sort of lovable and adorable character, the Pelicans have leaned in to the Munch-ian scream, grabbing as many clicks and eyeballs as they could in the process.

All these King Cake Baby haters and we are over here like #TeamKCB pic.twitter.com/qmLENvF0pC

Until Monday, though, King Cake Baby didn’t have its very own Twitter account. That minor oversight was rectified when the Pelicans’ social media department exploited Twitter’s rules to swipe the handle @KingCakeBaby from Mason Ginsberg, who covers the team for the ESPN/TrueHoop blog, Bourbon Street Shots.

Ginsberg created the Twitter handle shortly after King Cake Baby’s debut last year. It remained relatively unnoticed and unused, firing off about 200 tweets in total, though he had grown more active over the past few weeks.

The account had only amassed a mere 300 followers or so, but that total jumped by an additional 100 on Saturday when ESPN’s Zach Lowe lobbed this jokey tweet.

On Monday, Ginsberg learned that Twitter had suspended the account, denying him access and deleting all of his prior tweets. He received no prior notification from Twitter as to why this had occurred, but shortly thereafter, @KingCakeBaby tweeted his arrival, as if the account’s prior history had never existed.

When others noted that the account was still showing up as suspended, @KingCakeBaby played it coy.

Reached for comment, Alex Restrepo, the Pelicans’ social media manager, confirmed that the account was now being run by his department, adding that they’d specifically requested this account by name from Twitter to coincide with Mardi Gras and King Cake Baby Bobblehead Night, scheduled for January 29.

“We asked Twitter for the name @KingCakeBaby since that’s the mascot’s name and that account was impersonating our mascot. Twitter allows parody accounts when the accounts states in the handle or bio that it’s a parody account,” Restrepo said via email. “This account did not.”

Restrepo is correct that when Ginsberg was manning the account he had not clearly labeled it as a parody. Per Twitter’s public rules, that’s a no-go. But when asked if anyone had considered reaching out to the previous owner to see if he or she would be willing to relinquish the account, Restrepo said he, “wasn’t aware of who was running the account.”

For his part, Ginsberg is less than pleased. He tweeted, “YO THIS IS SOME MESSED UP STUFF, and, “I just got my awesome King Cake Baby twitter handle hijacked.” What’s more, he would have been more than happy to give up the handle sans compensation.

Would you mind letting us have this handle? We'll give you an autographed Asik jersey in return. Thanks!"

– Literally all they needed to do

(If you're listening, Pels, please do not give me an Omer Asik jersey. It was just an example of not wanting anything in return.)

Both Ginsberg and other writers for Bourbon Street Shots declined to comment, but the Pelicans’ explanation of why that they just had to have this specific handle doesn’t hold up. There are a number  of parody King Cake Baby accounts which are currently active. Did the team ever consider using a slightly different name, rather than demanding that Twitter give them Ginsberg’s account?

“This account was the mascot’s full name, and was impersonating KCB without stating that it is not affiliated with [us] so that’s why we requested it from Twitter,” Restrepo said.

Thing is, that’s not the route that the Pelicans took when they went about creating a Twitter account for their other, equally horrifying mascot, Pierre the Pelican. Take a look at the bio for @PierrePelican. It does not state that it is a parody and was around long before the Pelicans launched their verified account, @PierreTPelican. Instead, the team simply added a letter and let whomever was giving them some free social media shine go about their business, without asking Twitter to settle this non-dispute.

Is this a heinous crime? No, but it is a reminder that branded social media accounts, as much as they would like to convince you otherwise, are not your friend and should never be mistaken for a real live human being. Don’t forget that.