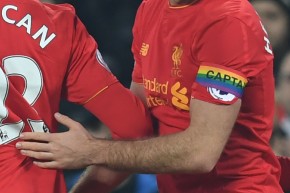 There are no openly gay players in England’s Premier League, but Greg Clarke, the chairman of the the Football Association, English soccer’s governing body, has discussed a plan which might change that. In an interview with the Times, Clarke claimed that he has spoken with 15 gay athletes over the last month to devise a strategy that would alleviate some of the pressures facing those that are still in the closet.

“I put the message out there that if a number of top-level pros want to come out, why don’t we synchronise it? So one person doesn’t have to come out on their own,” he told the Times on Monday.

“The Premier League, the Football League and the FA could do it at the start of the season. At the start of the season everybody thinks it is their season, the crowds are happy, the sun is shining. I was asked [recently] if football is ready for top-level pros to come out and I said I’m not sure we were. There was a survey which said people would support gay people in their own team, yes, but I’m worried about what they said about gay people in the other team, not that they would do bad things, but I said we should prepare well.”

At the time, Clarke insisted that the presence of a small minority that can’t or won’t be dragged kicking and screaming into the 21st century meant making one’s sexual identity public was still too much of a risk and would lead to “significant abuse.”

“I’m cautious of encouraging people to come out until we do our part of the bargain and stamp out abuse,” he said. “There’s a very small minority of people who hurl vile abuse at people who they perceive are different. Our job is to stamp down hard on their behaviour.”

Clarke also stressed that the decision to come out would ultimately reside with the players, adding that he in no way wanted to force anyone’s hand.

“I don’t want to be part of a process that says, ‘You’ve got to come out.’ That’s not right,” Clarke said. “People are cautious. It’s a one-way street. Once you’re out of the closet, you’re out.”

Homophobic chants remain an ingrained part of soccer culture, so much so that the secretary general of the Mexican Football Federation dismissed FIFA’s fines and critiques for homophobic chants as some kind of cultural misunderstanding. Further, according to Robbie Rogers, who came out after leaving Leeds to join Major League Soccer, homophobia runs rampant in the locker room, particularly in England.

“Walking into the Leeds locker room was like diving into a shoe-box-sized space filled with testosterone-charged gladiators,” Rogers wrote in his memoir “Coming Out to Play.” “There were way more homophobic remarks than I could count. My teammates would throw around the word ‘faggot’ like it was an all-purpose put-down.”