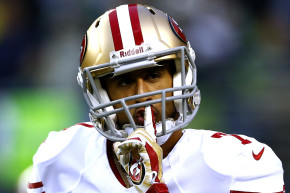 At the conclusion of the San Francisco 49ers’ season, the players decided to bestow the Len Eshmont Award, given each year to the Niner who “best exemplified the inspirational and courageous play” of Len Eshmont, to Colin Kaepernick.

You’d think that would prove a fitting coda to Kaepernick’s season, especially for all the professional hand-wringers who fretted that his decision to take a knee during the National Anthem would bring about an irrevocable rift in the locker room.

However, all this did not sit well with Joe Theismann, former pro quarterback and hawker of sketchy, ineffective prostate supplements. On Wednesday, he appeared on Fox News’ noon weekday gab-fest Outnumbered to get a few things off his chest. For those who aren’t familiar, Outnumbered is hosted by a rotation of four female pundits flanking one guest dude who’s gifted the hashtag #oneluckyguy. (Yes, the entire concept is dated and patently sexist. This is Fox, after all).

So, tell us, Joe, why has Kaepernick forever sullied the noble Len Eshmont Award?

“I don’t agree with what he’s done,” Theismann said, telling the audience that he always wears an American flag lapel pin as if he were some kind of ersatz perma-candidate for office. “Everybody has the right to express their opinion, but not in the workplace.”

Kaepernick can protest, but only when his employer says it’s okay. Got it. What, then, should commissioner Roger Goodell, who Theismann called “wishy-washy,” do?

“I would like to see the National Football League finally stand up and take a stance and say, ‘As part of our new policy going forward, we’re going to adopt the same policy that the NBA has, that you will stand for the National Anthem,'” he said.

Theismann added that one owner, the Kansas City Chiefs’ Clark Hunt, has already taken this bold step, ordering his players to stand or be banished from the team forevermore. This is not true. Hunt said he’s not a fan of anthem protests, but no top-down directives have been issued.

Regardless, according to Theismann, Kaepernick didn’t deserve the award because the Niners stunk.

“I just find it hard to believe,” he said. “You’re a 2-14 football team. He’s won one football game. What has he inspired? And the players voted for it. You question players at times. They just sort of move along en masse and do this.”

It’s an annual award. Someone was going to get it, no matter how badly the team copulated with a canine. Oh, and remember a few minutes ago, when Theismann said the flag represented one’s right to free expression? That may be so, but once someone starts warbling a few bars of the National Anthem, it’s something else entirely.

Meanwhile, Kaepernick kicked off the offseason by collecting donations and bringing much-needed items to Bay Area homeless shelters and orphanages. You can watch Theismann’s Outnumbered segment here if you want.

But since the Kaepernick faux-outrage with all its attendant flabby rhetoric has become so tiresome, we recommend your read current Niner Torrey Smith’s tweets instead. There, he tells a lovely story about Theismann acting like a dick when a young Smith approached him for an autograph.

Who cares what he thinks? Everyone from DMV knows he is one of the most arrogant people ever..his opinion has no value https://t.co/9GwSaeEUVi