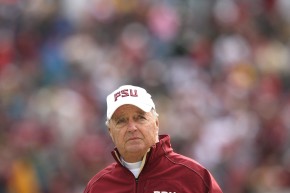 Bobby Bowden, former  Florida State University head coach and briefly a Trump hype man who worries about “these other nations embarrassing us,” was a guest on Wednesday morning’s edition of ESPN’s “Mike and Mike” show.

He was ostensibly there to promote his new book, “The Bowden Dynasty: A Story of Faith, Family & Football,” a ghostwritten tome that’s sure to be packed with the kind of muscular Christianity and unsubtle proselytizing commingled with stirring tales of gridiron triumph that you’d expect from a high-ranking member of the Fellowship of Christian Athletes. Instead, he pivoted from worrying about single-parent homes to recount a homophobic joke he used to tell.

“65 to 70 percent of my boys did not have a daddy at home.  They’re raised by mommas, sweet old mommas,” Bowden said. “You know, thank God for them mommas. Or grandmomma. Many times it was a grandmomma, you know, or big sister, or aunt.”

Okay. There’s maybe one decent direction this can take. Let’s see if Bowden goes that route.

“But where’s the man?” Bowden asked. “A boy needs a male figure and the girls do too. You know, someone to discipline them and make them be a man.”

Oh no. This is going to get worse, isn’t it?

Oh boy. Bobby Bowden on players not having dads. "They wanna grow up to be men, like their momma. That's why they wear earrings." pic.twitter.com/iBhUueqEqw

And then everyone burst into laughter, because nothing is more hilarious than this kind of ancient, retrograde “humor.” While the trio was yukking it up, Bowden clarified, “I’m kidding about that.”

Oh, and he also would climb into the beds of potential signees.

We’re assuming this is a joke as well.