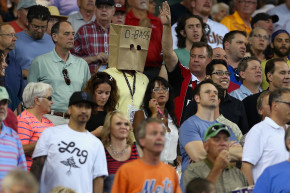 It's almost like public financing of stadiums is a huge scam

The Arizona Diamondbacks would very much like a new stadium, or at least to get out of paying for the upkeep on the one they currently inhabit, soon-to-be 19-year-old Chase Field.

Tuesday night, the Diamondbacks filed a lawsuit against Maricopa County, an escalation of a year-long squabble in which they’ve failed to convince the county it should foot the bill for millions in stadium upgrades, throw in a few tax breaks, and/or let them out of their current lease agreement. Said agreement bars the team from fishing around for someone to build them a new stadium until 2024 or leave until 2028, and the Diamondbacks don’t like that one bit.

What’s the problem with Chase Field, exactly? In February, Diamondbacks CEO Derrick Hall said it’s “too big” to regularly sell out, even though the team hasn’t had a winning record since 2011. As such, they threatened to move unless the County coughed up $187 million dollars to upgrade an “aging,” stadium as Hall described it, to ensure that the team plays in a “facility that is state of the art.” If not, they’d either sue or leave, though the Diamondbacks failed to say exactly where they’d move to and if they might have been willing to bend if their rent were drastically reduced.

It’s worth noting that Maricopa County, unlike other municipalities, didn’t include a “state of the art” clause in their initial agreement, one that would have forced them to keep up with all the cool trinkets and toys featured in recently-built stadiums and left the county over a barrel. Further, the $187 million dollar figure floated by the Diamondbacks includes a ton of speculative and vague costs far beyond any needed upkeep, a big chunk of which the Diamondbacks are responsible for, according to a third-party assessment conducted in 2013.

Maricopa County smartly refused and in April, County Supervisor Andy Kunasek fired off a blistering response to Hall, labeling the Diamondbacks a “parasitic enterprise.” According to the Arizona Republic, Kunasek went so far as to hand-deliver the written reply, ripping Hall a new one.

As Kunasek delivered the letter to the team, he directed a profanity-laced storm at Hall, calling on owner Ken Kendrick to “take your stupid baseball team and get out” and go back to “f–king West Virginia,” according to team notes that Kunasek does not dispute.

In the ensuing months, Maricopa county floated the idea that they would sell the stadium to out-of-state private investors rather than cave to the Diamonbacks’ demands, a ploy that was later revealed to be a vague and ultimately empty threat. Both sides accused the other of sabotaging their best-laid plans and now the Diamonbacks are going ahead with their oft-promised lawsuit, because the team just loves its fans that much.

Via the Arizona Republic:

“We have made a promise to our fans, who have been partners with us on the building of this stadium and our franchise, to provide the best experience in all of baseball in a safe and welcoming environment,” Managing General Partner Ken Kendrick said in a statement. “The inability of the Maricopa County Stadium District to fulfill its commitments has left us with no other option.”

Kendrick said the lawsuit would not impact the “day-to-day operations” of the team or the upcoming season, adding that “for 2017, Chase Field is completely safe.”

So, you’ve got a team saying their stadium is old and decrepit, a description that the Maricopa County Board chairman called “outrageous” because it’s clear to anyone without skin in the game that, “the team just wants a new stadium now,” and said taxpayers shouldn’t be forced to shoulder the load, not when millions have already been gifted to a private business.

Meanwhile, boilerplate press release or not, the Diamondbacks had the temerity to claim that the decision to take Maricopa County to court is really all about fan service and not the last card remaining in their hand. Great.