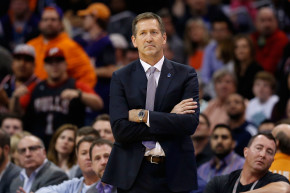 A strong and true take

The Knicks are bad. They are bad in many ways, but hoo-boy, do they suck on defense. One dude that’s noticed all the bad, no-good dearth of defensive chops is the Knicks’ head coach, Jeff Hornacek, who’s been cursed with witnessing all this first-hand.

“I have to find someone to play some defense,” Hornacek said following Monday night’s 115-103 loss to the Orlando Magic, who entered the game with the NBA’s 27th ranked offense. “You can’t come out beginning of the game – I think their first three or four baskets were 3-pointers. We’ve got to have better pride in that.”

Oh yeah. It was that bad. They let Jodie Meeks torch them from outside in the first quarter, swishing 3 of 4 from downtown and scoring 14 on his way to a season-high 23 points. Look at this:

By the end of the game, Aaron Gordon, who’s struggled while the Magic try to cram his modern, rim-rolling, non floor-spacing frame into a wing-sized hole, was draining contested threes and flushing alley-oop dunks.

Nor could any Knick manage to keep Elfrid Payton, currently sporting a .259 three-point shooting percentage, from worming his way into the paint and then dishing to any number of wide-open shooters. A simple pick and roll action at the top of the key gave Magic wings time to enjoy a leisurely meal and quick cigarette break before a Knick could muster the gumption to close out. Ducking under any and all screens didn’t really help much either, especially with Carmelo Anthony lumbering around with all the verve and intensity of a twice-divorced dad who just dragged his ass out of bed at 2am because he forgot to take out the recycling.

The Magic –the Magic! – dished out 30 assists, at one point sporting an 18-1 assist to turnover ratio. And if all else failed, they dumped the ball down to Nikola Vucevic in the low post (avert your eyes, analytics mavens) who was able to convert with ease over a trio of wilting Knicks bigs.

Meanwhile, Hornacek slipped further and further into a slough of despond, because what’s the goddamn point of it all, anyway.

“I don’t think our guys aren’t trying. Maybe we’re just not capable of it. I don’t know,” he said. “That’s what we’re going to have to figure out. Maybe you have to play some of these other guys. We might have to mix the lineup up somehow.”

He’s not wrong. Even Kristaps Porzingis’ D has fallen off this year, and while Joakim Noah has started to work his way back into form, he’s still one of the league’s worst rim protectors. They’ve got maybe one plus defender at small forward and shooting guard combined and no amount of diddling with the rotation will change that.

Any other ideas, Jeff?

“There are times where we just didn’t go after the ball hard enough,” Hornacek said. “There were some rebounds up there that they just took out of our hands and came over our backs. That’s when maybe we need to be in the weight room a little bit more.”

Sure. Maybe a few reps will clear everyone’s head. Or take up a nice hobby. Things aren’t all bad. You made up a dandy list of New Year’s resolutions and stuck them to the fridge just to remind yourself to keep plugging away. Cheer up, Jeff. We’re sure ace defensive coordinator Kurt Rambis will come up with a cunning plan. Eventually.