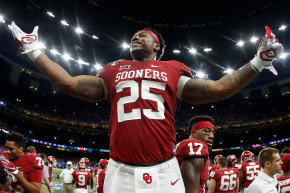 Brent Musberger On Woman Beater: “He’s Just One Of The Best”
By Robert Silverman

Brent Musberger On Woman Beater: “He’s Just One Of The Best”

In an alternate universe, there might exist a way for ESPN to talk about Joe Mixon, the University of Oklahoma running back who assaulted a fellow student in 2014, shattering four of her bones, without the discussion devolving into boosterism. This is not the universe we inhabit.

During Monday night’s Sugar Bowl, Brent Musberger gave a brief rundown of Mixon’s college career, referring to his brutal assault charge as a “controversy” that viewers at home might be aware of. Musberger went on to add that he’d spoken with head coach Bob Stoops who assured him that Mixon was “doing fine.” Though the release of the tape was “troubling, very troubling” for Musberger, he still depicted Mixon’s act of violence as part of a redemptive tale.

I rewound this to make sure I wasn't being too tough on Brent. Nope. It's even worse the second time. This is embarrassing. pic.twitter.com/QAoikxck9G

“He’s just one of the best,” Musberger said. “And let’s hope, given a second chance by Bob Stoops and Oklahoma, let’s hope this young man makes the most of his chance and goes on to have a career in the National Football League.”

One can only assume that a producer at ESPN told Musberger that his attempt at on-air rehab wasn’t going over too well, telling him to walk it back or at least clarify what he meant. Musberger doubled down.

Brent Musburger fired up about criticism regarding his support of Oklahoma RB Joe Mixon. pic.twitter.com/Yg4rkm9oyo

“You know, Jess, apparently, some people were very upset when I wished this young man well at the next level,” he said, unable to contain his frustration and peevish anger. “Let me make something perfectly clear. What he did with that young lady was brutal, uncalled for. He’s apologized. He was tearful. He got a second chance. He got a second chance from Bob Stoops. I happen to pull for people with second chances, okay? Let me make it absolutely clear that I hope he has a wonderful career and he teaches people with that brutal, violent video. Okay? Second down and nine.”

To a certain degree, it was a no-win situation. Ignoring the fact that Mixon maybe shouldn’t have suited up at all would have read as a whitewashing, and the Sugar Bowl isn’t the best venue to delve into an incredibly fraught conversation about violence against women, not when you’ve only got a few moments between plays to hash out a nuanced thought.

But he definitely could have mentioned that the victim was harassed and nearly driven from school, and Musberger seems far more peeved that anyone would dare to criticize his initial tone-deaf, glossed-over take than anything else. What’s more, it’s impossible to separate the second chance that Mixon received from his football gifts. You can’t praise his pro prospects and hope that he has a chance to grow and learn without noting that two are inextricably linked.

Yes, when Musberger talked about the video as a teachable moment, he was trying to blurt out his last few words before the snap. Giving him the benefit of the doubt, he seems to be referring to whatever good Mixon might be able to do. (Again, this is not a conversation that should be had in-game.) But what that video actually “taught” was that without visual evidence, a good chunk of fans will give an athlete a pass or assume that the victim bears some degree of responsibility.

And Auburn fans, please don’t use this as fodder for partisan chant, not when you know Oklahoma players will close ranks.

Video of Auburn students chanting "He hits women!" at Joe Mixon, while Mixon & Mayfield wave their arms in the "louder" motion. #Sooners pic.twitter.com/Wi2St05390