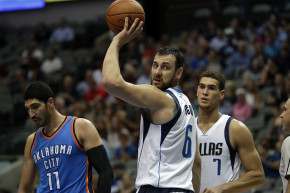 Is the conspiracy real? No, it is not

You remember Andrew Bogut? Tall feller from Australia with a penchant for throwing sharp elbows and wading knee-deep in conspiratorial bullshit? He hasn’t been playing that much of late and the crack sleuths at r/The_Donald smell foul play.

Friday morning, a redditor named WhiteGenocideXLV threw up a post titled,“This is Dallas Mavericks Center Andrew Bogut. After He Took To Twitter To Help Expose Pizzag*te, He Was Sidelined For 11 Games With a Mysterious ‘Injury.’ Bogut Risked His Career To Help Expose The Truth. Let’s Make This The Top Google Search Result For ‘Hero.’”

For those that have managed to avoid the recent rise of the fascist right in America, “White Genocide” is conspiratorial bunk howled by white nationalists who fill their diapers every time they see a person of color, and “XLV” refers to a poem by Ezra Pound written around the time he started turning towards fascism. Oh, and r/The_Donald is an insane hub for the most fevered and toxic of Trump loyalists, and is littered with outright propaganda, bile-soaked misogny, and insane conspiracy theories.

Anyway, let’s tumble down this deeply stupid rabbit hole. Over the December 4 weekend, Bogut fired off a flurry of “I’m just asking questions, mate”-style tweets about Pizzagate. That kind of brave truth telling just would not stand, man. Not with a Never Trumper like Mark Cuban signing his paychecks. So, during a game on December 5, the Dallas Mavericks made up an injury out of thin air, pinning Bogut’s alt right-adjacent behind to the bench for 11 of the last 13 games.

To clarify, none of the above bears even a hint of truth. Here, you can watch a video of Bogut getting injured. What’s more, Bogut has been sidelined for about a third of his career, and the 10-23 Mavericks would very much like to dump his expiring contract before the deadline. If anything, they’re being overly cautious just to ensure that Bogut’s trade value doesn’t sink any lower than it already is.

As of this writing, the post has received more than 5,000 upvotes, and, like close to 50 percent of Trump voters, many r/The_Donald denizens are sure that Pizzagate is real. Just ask golfrinserepeat.

“One way you can tell Pizzagate is real is the very odd reaction to it,” he writes. “If it was total bullshit, the left would joke about it and rub it in our faces. Instead, they demand everyone shut up about it. NOW! And the false flag thing at Comet Pizza, that was another tell. It’s very real.”

They are also mad. Mad Online, even. “Cuban is a fucktard,” writes Texas_Rangers. “Why did he have to come out and chop his balls off and support Hillary. He used to be a great owner!”

And they don’t like anyone talking trash about Bogut, particularly any reporting about Bogut, because free speech.

“They totally rag on him in the article and comments,” writes don_tiburcio, referring to a Deadspin article. “What gets me is that the dude has the right to speak on his Twitter however he wants and if anything, he’s talking about a subject where children are being abused which should bring attention to things like cracking down on trafficking, not ridiculing people for theories.”

Eventually, even wide-eyed redditors started raising eyebrows at this one. They pointed to Bogut’s injury-riddled career and suggested that if the goal was truly to silence or otherwise diminish him, they’d keep him in the lineup, just so the bad, no-good media would continue to mock him, such that WhiteGenocideXLV was compelled to clarify his thoughts.

“For the record: I have no idea whether Bogut’s injury was legitimate,” he writes. “However, the timing of the injury is extremely coincidental. Also, his boss, Mark Cuban, is a never-Trumper.”

Sad to say, despite WhiteGenocideXLV’s best efforts, this Reddit post is not nor will it ever be the top Google search result for “hero.”