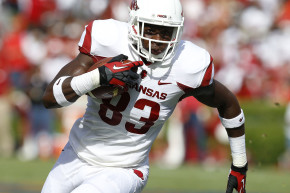 The Shoplifting Saga Of Arkansas’ Jeremy Sprinkle
By Robert Silverman

Join us for a delightful tale of labor exploitation

College football players receive no financial compensation for their labor, thanks to the NCAA’s insistence that this is all just a fun hobby they engage in while earning a degree. However, that doesn’t mean they don’t receive some nice parting “gifts” in exchange for their efforts if they should make it all the way to a bowl game.

Take this year’s Belk Bowl, brought to you by the fine folks at Belk, a department store chain with close to 300 locations throughout the South. Each player from the University of Arkansas and Virginia Polytechnic Institute and State University was given a nice $450 gift card to spend any way they darn well pleased at the SouthPark Mall Belk in Charlotte.

But $450 dollars wasn’t enough for Arkansas senior tight end Jeremy Sprinkle, who was reportedly caught shoplifting after the team’s 90-minute shopping spree had concluded. The Charlotte police were called and Sprinkle was briefly detained and charged with “unlawful concealment” before being let go.

Via SEC County, he allegedly had in his possession:

In SEC County’s original reporting, they wrote that Sprinkle maxed out his gift card and just had to snag these $259.99 worth of fire jawns too, according to unnamed sources. The sentence indicating that he’d taken “items worth more than the allotted cost available,” has since been deleted from their updated article with no additional information, so the question of what else he bought or if he did buy anything else remains unknown.

Regardless, Sprinkle was still suspended by the team two hours before kickoff, though they failed to state exactly why.

“Jeremy’s suspension has been known by our staff and players for several days, so we’ve had a chance to prepare our game plan accordingly,” head coach Bret Bielema said. “Throughout his career and this season as a graduate student-athlete, Jeremy has displayed numerous times the qualities we want to represent our program. We have standards within our family that must be upheld on a daily basis, and unfortunately he failed to do that in the last week.”

Arkansas built up a 24-0 lead over Virginia Tech at the half, but the Hokies scored 35 consecutive points to steal a victory from the jaws of defeat, 35-24. In conclusion, shoplifting is maybe bad, but not paying college athletes is actually bad.