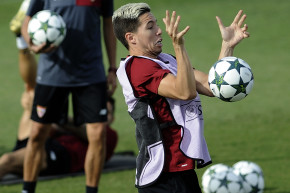 The fun (read: not fun) practice of hacking into a famous person’s social media for the lulz has apparently claimed another victim. On Tuesday, Sevilla midfielder Samir Nasri’s Twitter account began spewing all sorts of unsubtle, sexy, sexy suggestions about a routine medical procedure. It started innocently enough, when this promotional tweet was sent out by the fine folks at Drip Doctors, a Los Angeles-based health, beauty, and wellness clinic.

The nice lady standing alongside Nasri appears to be Jamila Sozahdah, a certified physician’s assistant and Drip Doctors’ co-Founder and CEO. There is zero reporting that she is in any way romantically linked to Nasri, but her presence was enough to send an unknown individual’s lust and/or desire to mess up Nasri’s day into overdrive. (All screenshots of the rude tweets courtesy joe.co.uk)

Nasri discovered what was going on and tried to quash the hot goss as quickly as it appeared, deleting the above string of tweets, and claiming, “Someone hacked my account and tried to spread rumors which is fake.”

Anyway, like a particularly cruel game of Whack-a-mole, as quickly as he was able to make the tweets disappear, they kept popping right back up, all of which seems to suggest that two separate people were logged into his account at the same time.

There are plenty more where those came from. If you’d like to read all of the x-rated thoughts from someone who is definitely not Samir Nasri, one Twitterer took diligent notes.

A full Transcript of tonight's events. A poor performance from Samir Nasri. pic.twitter.com/6inBS1eKXc

Drip Doctors eventually chimed in towards the end of this furious volley of tweeting and deleting.

And Nasri backed them up.

My account got hacked sorry about what happen earlier

This is your friendly reminder to regularly change your passwords and install multi-factor authentication for all your cell phones, tablets, and computers.

UPDATE: Because the bawdy tweets went viral, the doping regulators are now getting involved. The World Anti-Doping Agency sets limits on the amount of liquid that can be inserted during an “immunity drip” without a specific medical need to do so, and Drip Doctors may have unintentionally crossed the 50 mililiter threshold.

The Spanish anti-doping agency (AEPSAD) have opened an investigation into Nasri and his use of the IV drip, according to Spanish newspaper El Pais. Sevilla are said to be surprised by the allegations, and will ask Nasri for an explanation when he returns to Spain on Thursday after spending the winter break in the United States.